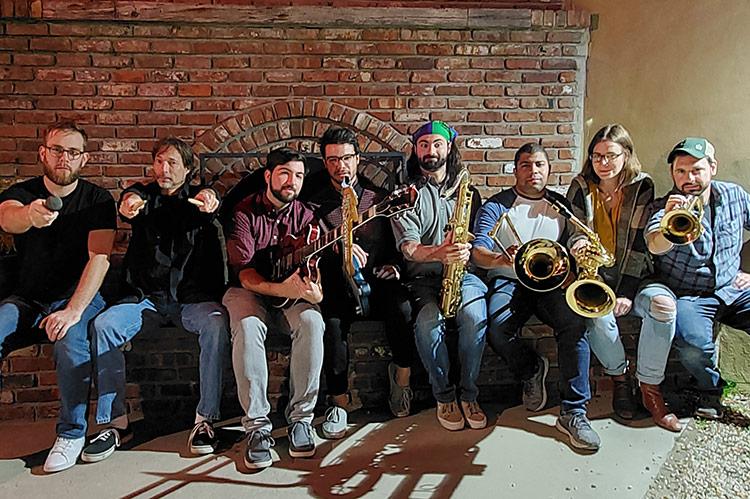 For the eight members of Real East End Brass Band, part of the fun of what they do is putting their acronym into various words. “REEB-hearsal” instead of “rehearsal.” “REEB-imagined” instead of reimagined. “REEB-tastic.”

But that’s really just a small part of what the band likes to do. They can otherwise be found jamming New Orleans brass band jazz standards, mashing in the sounds of classic rock, ska, reggae, and punk, composing original music, and playing high-energy shows at local breweries, restaurants, festivals, and other venues. Most recently they rocked the Greenport Brewery, and on Friday, Feb. 7, they will play the Clubhouse in Wainscott at 4 p.m.

Influenced by bands like Preservation Hall, Lucky Chops, Rebirth Brass Band, and Trombone Shorty, REEB first got together in October of 2018 as a four-piece band. It collected new members along the way to its first gig the following March.

“REEB fell into place in such a great way,” Mr. Grindle said. “Everyone has training. We all have a frame of mind that made it so easy to work together in so many ways. We understood an awful lot in common and are able to put together a band that can gel.”

Mr. Ward, Mr. Silipo, and Mr. Greene grew up locally. Mr. Lorefice and Mr. Granger are originally from Westhampton Beach. They’ve all played in other bands on their own or together. Mr. Silipo teaches private music lessons and everyone else is a music teacher in either the Montauk, Springs, or East Hampton schools.

“Having every single person in the band able to read music is amazing,” Mr. Mandato said. “We add harmony, arrange, mash-up songs. It helps having a collective music education and makes it really fun because you can rely on everyone.”

Their versatility with different instruments is a product of their musical training, and the band members say they inspire each other. “There’s a mutual respect . . . and it makes me want to become better in my craft, too,” Ms. Kelly said.

Mr. Greene said he had limited experience with this type of music before joining Real East End Brass. “What excites me most about New Orleans jazz is the energy and the originality,” he said. “Chris is a huge fan of this type of music, which was part of the inspiration for starting the band. Our musical influences are very diverse, and that is reflected in the music we make.”

For anyone wondering how good the band is, first think about the New Orleans jazz tune “You Move, You Lose,” and imagine how it would sound with seamless transitions into Ed Sheeran’s “Shape of You” and Green Day’s “Boulevard of Broken Dreams.” Not everyone can pull that off. The music keeps you on your toes.

One of the band’s goals is to record an album. Real East End Brass has several original songs, including “Music to Your Life,” which started as a single line of a horn melody scribbled on a Post-it note that Mr. Silipo left on Ms. Kelly’s coffee table one night after rehearsal. They took the idea and ran with it. But for their song “How It Started,” Mr. Mandato deliberately pulled up a fresh notation chart on his computer, horn in hand, able to immediately write down what he played or play what he wrote down. Mr. Greene added the lyrics later on.

“There’s a lot of collaboration involved,” Mr. Grindle said. “Whether it’s a kernel or small snip of an idea, songs evolve. Chris always brings something fleshed-out to the table.”

Mr. Silipo, whose father, Bucky Silipo, has been playing music locally for decades, said the band has “been a great time for the last year and a half. I really enjoy furthering myself musically, since I’m not an educator like everyone else is. I get to pick up pieces from each one of them and bring it to my own music.”

At the Greenport Brewery in January, Real East End Brass found itself competing for attention with a football playoff on the TV, but when the game ended, almost everyone stayed for the band.

“It was a blast. Every single time we get together, every show, it just elevates from the last one,” Mr. Ward said. “It was incredible to be able to entertain people and see them dancing and cheering.”

The band members’ camaraderie is obvious. They finish each other’s sentences and laugh a lot. Mr. Grindle even allows his band mates to occasionally use the F-word — “fiddle” — instead of “violin.”

“It’s an atmosphere where you can stretch. What can you discover about your own playing? It’s a great place to explore,” Mr. Grindle said. “I think that comes out in the performances. When we get together, we have that kind of energy, that kind of good time, a good vibe.”

Mr. Greene, for whom singing in the band “is such a thrill,” said Real East End Brass feels like family. “I hope to build our following in the community and on the East End, and to continue writing original music, but at the end of the day, as long as we’re making music together, I’ll be a happy guy,” he said.