Janice Whalen always wanted to help children; her family made that happen 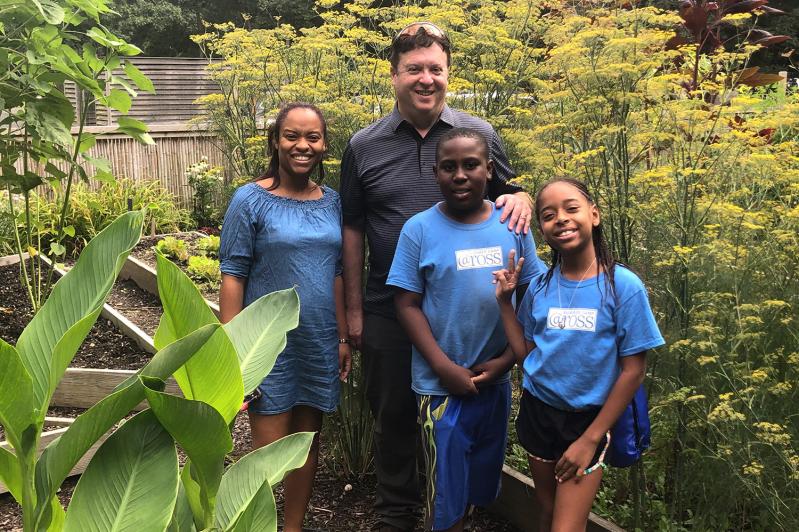 Richard Whalen met with young Jamaican visitors to the Ross School Camp at the school this week. From left are Jannel Barrett, Nathan Rhooms, and Zpennelle Barrett.
Christine Sampson
By Christine Sampson

Janice Blair Whalen would have loved the idea of sending two children from the Linstead School, in an economically disadvantaged area in Jamaica, to the Ross School’s summer camp, her husband, Richard Whalen, said.

She herself had gone to that primary school some years before moving to the United States in 1994.

Ms. Whalen died in 2016 of complications related to treatment she was receiving for a mental health condition. Her husband, a local attorney, said she had had a difficult life growing up in Bog Walk, Jamaica, in a poor family where she and her sister were largely on their own by the time they were in high school. He recalled that his wife’s family said the two sisters had always wanted to form an organization dedicated to helping children. That’s how the Janice Blair Whalen Children for Life Foundation was born in 2017.

“For all the things that happened to her, when I found Janice she had a smile on her lips and joy in her heart,” Mr. Whalen said. “She never stopped smiling and never lost her sense of humor.”

For the last two weeks, the foundation sponsored two cheerful kids from the Linstead School, Nathan Rhooms, 9, and Zpennelle Barrett, 10, whose name is pronounced “SHEN-nell.” Nathan and Zpennelle traveled to East Hampton with Jannel Barrett, Zpennelle’s mother, for two weeks of Ross School day camp, and have also been doing some local sightseeing with Mr. Whalen as their tour guide.

“I like the food that they serve. They serve healthy foods and they make learning fun,” said Zpennelle, whose first camp week was dedicated to culinary arts and jewelry making.

Nathan, who did sailing and volleyball, added, “It’s wonderful. I like that everybody here is friendly and the sports are fun.”

This was the first time that either child had been to the United States, and they agreed that life here is very different from life back home. They are in fifth grade at the Linstead School, which Mr. Whalen said is well run but lacks the kind of resources many schools in the U.S. have.

The Janice Blair Whalen Children for Life Foundation has already donated musical instruments for the school band. Its next mission is to make healthier school lunches more accessible to students — which will prompt its eight directors to begin formally fund-raising in stead of supporting the organization from their own pockets, Mr. Whalen said.

Madeleine Narvilas, one of the directors, explained there is a two-tiered lunch system at the Linstead School: free lunches, which are provided by the government but do not include vegetables and healthy options, or paid lunches, which are more nutritious but hard for families to afford.

“Paid lunches were much better than the government-sponsored version of lunch,” Ms. Narvilas said. The students at Linstead “asked if we could help with that. The haves and the have-nots are distinguished by those who have to eat the free lunch versus the paid lunch.”

It was Ms. Narvilas’s daughter Mariella, who studies at the Ross School and was a camp counselor there, who had the idea of bringing two Linstead students to Ross. During a visit to the school last year, Mariella interviewed students about their needs and wants.

“I remember from her notes that the kids specifically needed [computer] equipment,” Ms. Narvilas said. “Some of them wanted to learn how to cook; sustainable agriculture was another interest, but more than anything they loved music and wanted instruments.”

Zpennelle and Nathan are having a good time and making lots of new friends at Ross, including kids from other parts of the world. They were excited after their first week of camp, heading into their second, and will have a lot to share with their peers back home.

“They will be bugging us to tell them about this,” Nathan said, particularly the fireworks show that was at Main Beach last weekend. “I’m going to teach my friends how to do volleyball.”

In Mr. Whalen’s law office in Amagansett, photos of Ms. Whalen show her as beautiful and lively, with a warm smile, during their travels.

“I can’t express in words how much I loved Janice, but I admired her because of what she had to deal with,” Mr. Whalen said, getting emotional. “The best we can do is honor her, and in a way that I think Janice would appreciate and admire and be thankful for.”