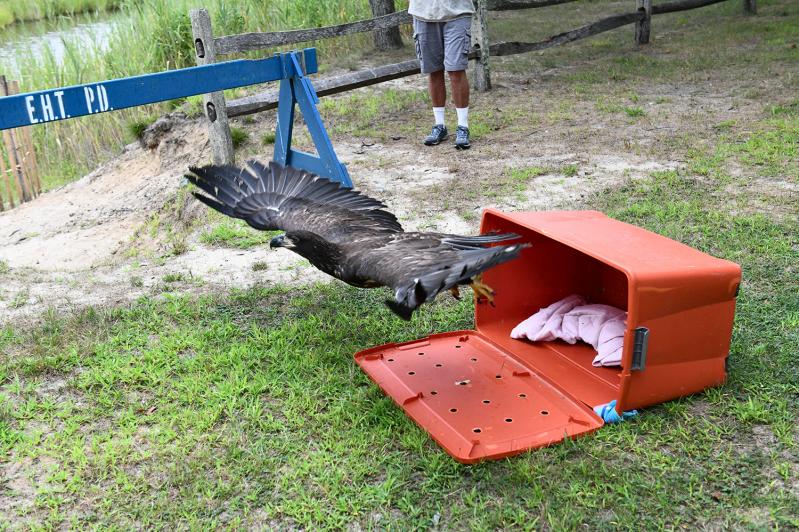 Chewy the bald eagle, found dehydrated and emaciated in Amagansett in June, soared back into the wild on Saturday after being rehabilitated at the Evelyn Alexander Wildlife Rescue Center in Hampton Bays.

Tom Ratcliff, a volunteer at the center, had collected the juvenile eagle in late June following a tip from Amagansett residents. He had no injuries, but his poor health was consistent with exposure to a rodenticide, said Virginia Frati, the executive director of the center. He could have ingested it by eating a poisoned animal, she said.

“Sometimes diagnostics are very difficult, so we just needed to look to supportive measures,” she said. “Then with time they get better on their own.”

The center started by giving Chewy fluids, then put him on a diet of soft foods. Nearing his release, they fed him 30 to 40 capelin fish and a rat split up between two meals each day, said Doria Canino, a wildlife technician. On that diet, he went from weighing 2.3 kilograms when he arrived to 3.9 kilograms at the time of his release.

On Saturday, Mr. Ratcliffe carried a caged Chewy to Fresh Pond in Amagansett. As soon as he removed the lid of the cage, “the eagle took right off,” said Debbie Kuntz, a rescue center volunteer.

“It’s always a great thing to see a bird that’s reintroduced back into the wild,” she said.

According to Ms. Frati, wild animals on the East End have faced more and more challenges in recent years as humans further destroy their habitats. Less habitat means more territorial disputes for food, she said, and some of that food could be poisoned.

“If we have a cold or something we can go lay down for a day,” Ms. Frati said. “We have people that will help us. They don’t.”

Because eagles’ metabolisms are so fast, one day without food could already lead them to malnutrition or dehydration, she said, and “they have to be in top form to catch their food.”

Ms. Canino came up with the name Chewy, a nickname for the Star Wars character Chewbacca, because the eagle would puff up his head feathers whenever someone approached his cage, making him resemble the furry character.

“I didn’t feel threatened by this bird like I do from some of the giant seabirds,” he said. “You know that all they want to do is pluck the eyes out of your head.”