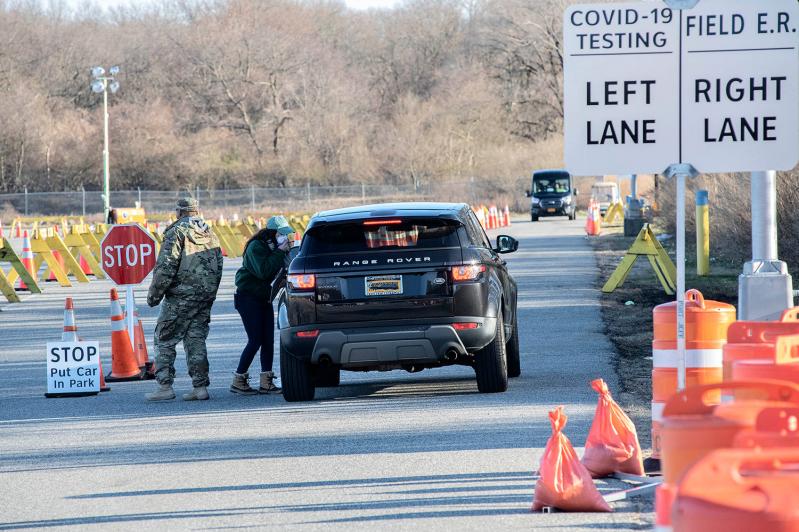 At a mobile testing site for COVID-19 set up in a commuter lot at Stony Brook University, those approved in advance for appointments stayed in their cars and were warned to keep their windows up.
Doug Kuntz
By Christine Sampson Christopher Walsh

With the full wave of COVID-19 patients still expected to be a few weeks out in New York State, Suffolk hospitals are scrambling to add beds, local medical professionals are feeling taxed, equipment is in short supply, and officials are worried that the public is not taking the threat of infection seriously enough.

During a national briefing late Tuesday, Dr. Deborah Birx, a White House official who is the coronavirus response coordinator, said that because New York City has an alarming number of COVID-19 cases — nearing 15,000 as of that morning — “Everybody who was in New York should be self-quarantining for the next 14 days to ensure the virus doesn’t spread to others no matter where they have gone, whether it’s Florida, North Carolina, or out to far reaches of Long Island.”

On Tuesday evening, East Hampton Town police said that anyone who had been in New York City recently should voluntarily follow the White House task force’s suggestion.

As of yesterday, East Hampton residents and visitors were urged to stay at home and leave their houses only if absolutely necessary.

“I call on everyone to think of your neighbors and your families and protect your own health as well as others’ by remaining at home for at least 14 days,” East Hampton Town Supervisor Peter Van Scoyoc said in a statement.  “Nothing is more important at this time than doing everything we can to ‘flatten the curve’ and slow the spread of coronavirus to prevent our health care system from being overwhelmed.”

Gov. Andrew M. Cuomo reported Tuesday morning that 25,665 people across New York State had tested positive for the virus. He upped his previous estimate that the state would see 110,000 cases in the next 45 days to a staggering 140,000 in 21 days. He had already called on a 100-percent increase in hos­pital bed capacity, with hospitals providing half of that and the remainder being in temporary medical facilities. On Tuesday he directed hospitals to plan to increase bed capacity by 100 percent or more.

Up until this week, Stony Brook Southampton Hospital had enough staff and equipment for 94 beds, and was working to increase that number by at least 60, according to Robert Chaloner, the hospital’s chief operating officer. A separate triage unit for suspected COVID-19 patients has been set up at the hospital’s Parrish Hall so that the main emergency department can operate as close to normal as possible.

“We’ve identified spaces for the beds, using some of the departments like the ambulatory surgery area,” Mr. Chaloner said. The beds will be in place by as soon as the end of this week or early next week.

“I get the sense that we’re not going to have a hard time meeting 50 percent, it may be a different story with 100 percent, but I’m sure they’ll find a way,” said Southampton Town Supervisor Jay Schneiderman.

In a phone call earlier this week hosted by Representative Lee Zeldin, Dr. Bettina Fries, chief of Stony Brook Medicine’s Division of Infectious Diseases, said that even if only 1 percent of the county’s 1.5 million residents become infected with COVID-19, “we’re talking 15,000 patients, 3,000 hospital admissions, and 750 may need a bed” in an intensive care unit.

“The hospital system across the nation, and in every nation, is not set up to deal with so many sick patients at the same time,” she said.

By Tuesday afternoon, Suffolk Executive Steve Bellone said there were 2,626 hospital beds countywide, about 300 of them in intensive care units, and “that has increased over the normal amount by a few hundred beds,” he said.

Dr. Fries said there was still a shortage of personal protective equipment among health care providers, including masks.

“We are still having issues with testing capacity,” she added.

Governor Cuomo on Sunday called on the federal government to implement the Defense Production Act to direct companies to produce medical supplies like ventilators and masks. States and hospitals are competing with one another for essential supplies, he said in a statement, and there is significant price gouging. A task force is dedicated to securing the supply chain, Dr. Fries said. “We’re going out of our way to get the government to help us with securing more of the N95 masks,” she said.

The county had tested 7,464 people at last count, Ms. Fleming said. The bulk of the tests are being performed at Stony Brook University Hospital in a parking lot at the university itself. Elsewhere, doctors’ offices have been given a limited supply of tests to be analyzed by  private laboratories, according to Dr. George Dempsey, whose practice, East Hampton Family Medicine, is one of the most relied-upon facilities on the South Fork. Dr. Dempsey’s office has tested fewer than 20 patients since the COVID-19 crisis began here.

“We’ve got to be so selective, and the results take so long that it’s not even really worth it,” he said.

At the East Hampton health care facility on Pantigo Road, Dr. Dempsey has set up two offices — a “clean” office where his staff conducts virtual visits, housed in his previous suite that recently had been flooded, and a separate office where patients with other illnesses can be seen in person. People showing symptoms of COVID-19 are seen in their cars in the parking lot, he said. Dr. Dempsey also has a nurse practitioner who makes house calls, mostly to the elderly.

Anecdotally, those on the front lines are feeling fearful and stressed, Dr. Dempsey said. His practice is working mostly virtually, using Skype, FaceTime, and other video-chat programs —
a practice quickly becoming known as “telehealth” — but he knows that not everyone is able to do that, especially in hospitals.

“They’re frustrated because they’re not getting guidance,” Dr. Dempsey said. “They’re frustrated about not having personal protective equipment. In some ways they’re more stressed, because being employees, they’re less able to make decisions.”

“Fear is natural when you have something like this going on,” he said. “We’re all learning about things we never had to deal with before and they are rising to the challenge in ways I always knew they would. Over all the spirit here is fear, caution, proud to be health care workers, and a commitment to doing the right thing.”

“A small number” of staff members have fallen ill and it is believed they were exposed to COVID-19 by community transmission rather than infection at the hospital, Mr. Chaloner said. The number of sick staff members has been low enough so far that it has not impacted patient care, he said.

Stony Brook’s hospital system is doing everything possible to protect health care providers, Dr. Fries said. “I am one, too, so I completely understand the fear and concern, and this is our top priority. This is a challenge that all the New York hospitals have right now.”

Governor Cuomo has reached out to retired health care professionals to press them back into service, because as hospital capacity increases, staffing needs also rise. At Stony Brook Southampton, Mr. Chaloner said they are “taking steps to make sure we have appropriate staffing and redistributing staff to even out the load.”

“We’re not asking people to work longer shifts or take on extra loads at this point,” he said. “We’re moving them around to anticipate the volume we think will be coming.”

Dr. Erin McGintee, an allergist and immunologist who practices at ENT Allergy Associates in Southampton, said there’s another public health issue looming now: We’re still in cold-and-flu season, COVID-19 is a full-on pandemic, and we’re just starting to get into allergy season.

“A lot of people with allergies also have asthma; symptoms are coughing and wheezing. Symptoms of COVID-19 are coughing and wheezing,” Dr. McGintee said. “People with an allergy flare will not get a fever. COVID-19 is not going to make people itchy, itchy eyes, itchy ears. . . . I’ve been instructing my allergy and asthma patients to be vigilant.”

She said the biggest threat to public health “is that we’re going to run out of the capacity to take care of the number of people who are going to get seriously sick. Early on, the message of social distancing wasn’t being taken seriously, and I might still go so far as to say that it still isn’t being taken seriously. People have been told to go home and I still feel like there are people who are not understanding this.”