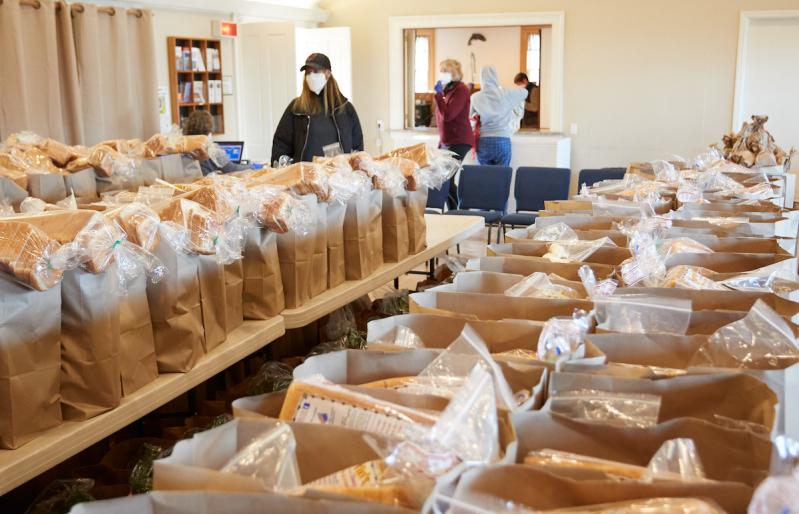 Bags of food for those in need were prepared for distribution at the Springs Presbyterian Church.
John Madere Photos
By Jamie Bufalino

The pandemic has caused an ongoing surge in people seeking assistance from East End food pantries and other social services organizations, their directors said this week.

At the Springs Food Pantry, demand has increased by more than 300 percent from last year, said Holly Reichart-Wheaton, the chairwoman, and in the first two weeks of November, 1,511 people have sought assistance. August was the slowest month of the year, she said, during which the pantry supplied 2,286 people with food.

The pantry, which operates every Wednesday from 3 to 6:30 p.m. at Springs Presbyterian Church on Old Stone Highway, has had such a large influx of clients that police have had to manage the traffic flow outside. The police didn't show up for two weeks in October, said Ms. Reichart-Wheaton, but the parking lot remained jammed. "I went to Kathee Burke-Gonzalez and said, 'We need help,' " she said, referring to the East Hampton Town councilwoman. The police presence has since resumed.

The level of food insecurity in the community remains dire, Ms. Reichart-Wheaton said. Last week a Sag Harbor man with a family of three sought assistance after having missed the Tuesday distribution at that village's food pantry. "He cried and said, 'I can't wait the week,' " she said.

Amber Waves Farm, Balsam Farms, and Share the Harvest Farm have provided the pantry with plenty of food including winter produce such as squash, sweet potatoes, and kale, she said, but because of the pandemic, the pantry is leery of accepting food donations from the public. "We would prefer monetary donations to buy food wholesale," she said.

For Thanksgiving, the pantry will offer a bag of trimmings including yams, cranberry sauce, and gravy mix, plus a $20 gift certificate to the East Hampton I.G.A. on North Main Street for the purchase of a turkey. The money for the feast was raised from Share the Harvest Farm's recent chowder cook-off held at the church, she said, and the pantry plans to have a chili cook-off to raise more in January.

Russell Calemmo, the vice chairman of the East Hampton Pantry's board, said demand has been "constant" this year. The pantry typically provides food for about 7,000 households annually, but in 2020, the number of clients has increased by 30 to 40 percent.

The pantry operates on the East Hampton Town Hall campus every Tuesday from 1 to 6 p.m., and from November through April, it has a satellite location at St. Michael's Lutheran Church in Amagansett on Tuesday from 4 to 6 p.m. For Thanksgiving, the pantry will distribute 300 fresh turkeys, and trimmings such as cranberry sauce and stuffing, Mr. Calemmo said.

"I'm expecting between 100 to 120 people next week," said Evelyn Ramunno, the executive director of the Sag Harbor Community Food Pantry, which distributes food at the Old Whalers Church on Union Street every Tuesday from 10 a.m. to noon. "We will be giving out turkeys, roasted chickens, all kinds of fresh fruits and vegetables, and all the accouterments."

On a typical week this year, she said, the pantry has provided food for about 93 people, but new clients keep signing up. "I knew this was going to happen with the holiday coming, but I'm prepared," she said. Two weeks ago she had been nervous about having enough donated turkeys and chickens on hand, but "people came through."

The number of clients seeking food from Meals on Wheels East Hampton has doubled this year according to Tony Giannini, the president. Now that summer crowds have thinned, and some residents have decamped to warmer locales, the service could use more volunteers, he said. People should also check their mailboxes for the annual holiday appeal for donations.

Instead of holding its traditional community dinner this Thanksgiving, the East Hampton Presbyterian Church will supply a feast for Meals on Wheels's clients and their caregivers, Mr. Giannini said.

East Hampton Town's Human Services Department will include a Thanksgiving dinner among the five frozen meals it provides weekly to those over 60. Normally there are about 70 or 80 clients, but this year that number has swelled to as many as 325, said Diane Patrizio, the director. From March 10 to Nov. 6, the department had delivered more than 44,000 meals, said Ms. Burke-Gonzalez at an East Hampton Town Board meeting on Tuesday. The department will also pick up groceries, prescriptions and other essential items that have been bought in advance with a credit card.

In May, the board had passed a resolution allowing the Jon Bon Jovi Foundation Food Bank, an offshoot of the Jon Bon Jovi Soul Foundation founded by John Bongiovi Jr. and his wife, Dorothea, to operate on the East Hampton Indoor Tennis campus. "I don't think any of us really realized the magnitude of what we were putting forth," said Ms. Burke-Gonzalez at the meeting. Because of increased demand, food pantries had been lacking supplies at a time when volunteers said they had "never seen such a combination of need, scarcity, and anxiety." The Jon Bon Jovi Foundation Food Bank stepped in and delivered 25,000 pounds of food a week to the pantries during its 18 weeks in operation.

"We are grateful for the opportunity to meet and work with the pantries we were able to serve," Ms. Bongiovi said in a statement read by Ms. Burke-Gonzalez. "We saw what is possible when we care for each other and are proud to be a small part of that."

"I know there are folks out there who are struggling," added Ms. Burke-Gonzalez. "But if you have the means, the food pantries could use your support."

--
Correction: An earlier version of this article gave the wrong information about the East Hampton Food Pantry's hours. The pantry is open every Tuesday, not every other Tuesday. In addition, a typo led to an overestimation of the number of turkeys the pantry would distribute. The pantry distributed 300 turkeys for Thanksgiving meals.