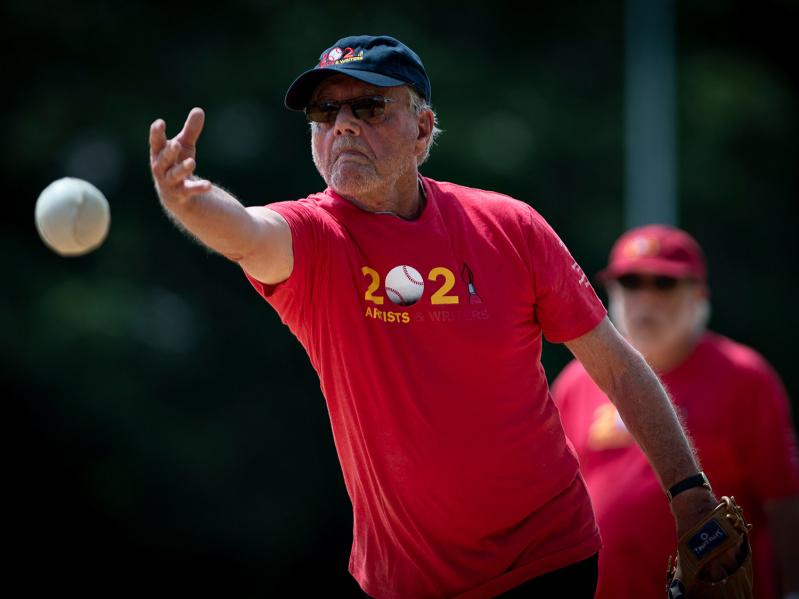 Walter Bernard is expected to start on the mound for the Artists.
Craig Macnaughton
By Jack Graves

Two South Fork standbys, the Artists and Writers Softball Game at East Hampton’s Herrick Park and Ellen’s Run, now based at Southampton’s Intermediate School, are slated for the coming weekend. The softball game, which raises money for the Retreat, the Eleanor Whitmore Early Childhood Center, Phoenix House, and East End Hospice, is to be played Saturday afternoon. Ellen’s Run, whose proceeds go toward providing breast cancer services to all women here at Stony Brook Southampton Hospital, is to be held Sunday morning.

It’s the 27th year for Ellen’s Run, the 74th for the Artists-Writers Game, which, legend has it, was first played in the sculptor Wilfrid Zogbaum’s front yard in Springs by insouciant artists into whose ranks the more ravenous writers were soon to insert themselves. Over all, the Writers hold a big lead, but in the modern era, which is to say in games played since 1988, the Artists, who won 11-9 last year, enjoy a 17-14-1 edge.

Sergey Avramenko, 37, a native of Belarus who was the recent runner-up at Jordan’s Run in Sag Harbor, won Ellen’s Run last year, besting a 500-plus field in 16 minutes and 22 seconds. Billy Malone, a Southampton High School junior at the time, was one second behind, and Gustavo Morastitla, a Gubbins Running Ahead employee, was three seconds back.

Julie Ratner, who in 1996 launched Ellen’s Run, and later the Ellen Hermanson Foundation, in memory of her younger sister, Ellen Hermanson, who died of breast cancer at the age of 42, first held the 5K at East Hampton High School. “We had such a large day-of-race turnout that it was hard to keep up,” she recalled Friday. “I remember Howard Lebwith saying if we didn’t start the race soon he’d be in the next age category.”

Things have gone much more smoothly in the years since, a period during which the foundation has established the Ellen Hermanson Breast Center at Stony Brook Southampton Hospital through money raised from Ellen’s Run, a spring gala, and end-of-year fund-raising appeals. Ratner said $381,000 in grants were given out by the foundation last year.

“We keep the money here, we have a commitment to the community, we believe that health care is a human right, we believe that women who live on the East End deserve the same high quality of care that they would receive in an academic environment, at the New York-Presbyterian/Weill Cornell Medical Center, say.”

“Our goal is to be on a par with the best facilities around. The staff at the Breast Center are wonderful and we have the best, most up-to-date equipment. We’ve told Bob Chaloner,” she said of Stony Brook Southampton’s administrator, “that we have just two requirements: one, that no woman will ever be turned away because she’s underinsured or uninsured, and, two, that the warmth that exists in our community be married to the rigor of an academic medical center. And they’ve done it.”

“One of the impediments,” she added, “has been that you can’t have a mammography without a prescription, but we’ve got a nurse practitioner at the Breast Center now who can write them. We’re trying to take care of every possible angle. . . . The foundation has changed the medical landscape here — we’re actually saving lives.”

There will be no awards ceremony this year, Ratner said. “Instead, we’ll hand out trophies to the first male and first female and first breast cancer survivor and medals to everyone who finishes. We’ll have a 50-yard kiddie run too. There’ll be a D.J., music, and warmups.” Check-in will be from 7:30, the race is to begin at 9.

Ronnette Riley, who has taken over the impresario reins from the 93-year-old Leif Hope, promises that the Artists-Writers Game, which, “for the first time ever, had a woman playing on both sides in every inning last year,” will be a lively affair, with three raffle prizes every inning, food, ice cream, T-shirts, and what has come to be customary riveting play.

Hope used to paint the Artists as fun-loving types and the Writers as ego-ridden loners obsessed with winning, though now it’s obvious that both sides want to. Over lunch the other day at the Fairway restaurant in Sagaponack, Hope’s thoughts were borne back ceaselessly into the past when he flew over from Connecticut a pitcher and catcher, C.B. Tomasiewicz and Kathy Neal, from the Meriden Falcons in 1977, and, in 1992, four members of the Raybestos Brakettes’ national-championship women’s softball team.

“I played second base that year,” said Riley. “Barb [Reinalda] was the pitcher and Doreen [Denmon] was the catcher. . . .”

“Peter Jennings, the ABC-TV anchor and Bridgehampton resident, was the first Writer to face Pat Dufficy’s rockets,” according to The Star’s 1992 account. “ ‘Better get a chest protector,’ yelled a teammate, Mike Lupica, the New York Daily News sports columnist, as the first ball whizzed in. . . .”

Back to The Star: With Jennings on first, “Dufficy, aroused, then blew away Mort Zuckerman, who, according to the announcer, John Scanlon, ‘owns everything,’ Lupica, and the former Washington Post editor, Ben Bradlee, to end the inning.”

“I loved that game,” said Riley, whose scorecards not only are works of art but serve to hold the Writers’ feet to the fire when it comes to lineup juggling. “Pele played in that game too — he was sweet.”

Inflation hasn’t affected the price of admission, which remains at $10, though donations, said Riley, are appreciated. Batting practice is to begin at noon. The Game is to begin at 2.