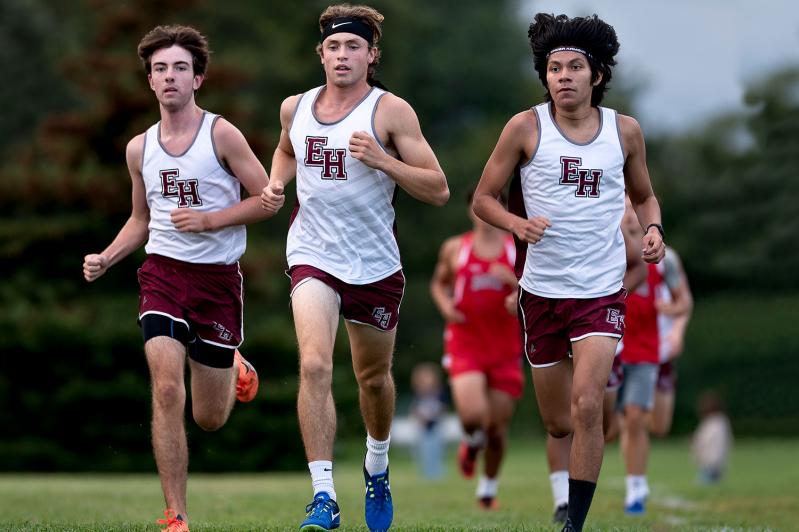 Liam Fowkes, Evan Masi, and Brayan Rivera — and Amari Gordon, who is not pictured — easily outran their Miller Place peers here on Sept. 28, putting them in line for the league championship.
Craig Macnaughton
By Jack Graves

The East Hampton High School boys and girls cross-country teams were undefeated and in contention for league championships earlier this week, though the boys perhaps had the clearer path.

A no-nonsense 16-42 thumping of Miller Place here on Sept. 28 in a 2.5-mile race around the high school grounds ended with the Bonackers taking the top four places in the persons of Evan Masi, Amari Gordon, Brayan Rivera, and Liam Fowkes. The win improved the boys’ mark to 3-0 with two meets left against teams, Amityville and Sayville, that as of that day had yet to win.

Osei and Chavez are ninth graders, and, according to Bonac’s coach, Diane O’Donnell, “are getting better in every race, as is Emma Tepan, a sophomore, who was our sixth finisher.”

Leah Fromm and Riley Miles, sophomores, and Shilo McCarthy, a ninth grader, round out the hard-charging team. Those three, she said, were “getting stronger and more confident. They’re all bonding as a team, they all support each other. . . . We’re taking it one goal at a time, beginning with a league title.”

But O’Donnell’s girls will have a tougher row to hoe than the boys when it comes to winning their league. Sayville’s girls were ranked fourth on the Island by Newsday in Sunday’s issue.

O’Donnell, though, is not all that impressed by rankings. “We weren’t ranked at all when we won the counties in 2019,” she said.

East Hampton’s girls, she added, will have three chances to beat the Golden Flashes, to whom they lost by 1 point in last season’s Class B county race at Sunken Meadow, a race in which Bayport-Blue Point was also competitive.

The first showdown is slated for Oct. 12, the Tuesday of homecoming week, at Sunken Meadow.

As for the boys, Kevin Barry, their coach, told them before the meet began here last week that it would be for the league title, and, judging by the result, they gave it everything they had.

Another nice thing, he said, was the fact that his second pack, his six-through-10 runners, was beginning to put pressure on the first pack. He hadn’t had such a good team, he said, since 2016. That team, which included Erik Engstrom, T.J. Paradiso, Eric Perez, and Jimmy Makrianes, had placed fifth in the state meet.

Fowkes, whose elder brother, Ryan, a former East Hampton star who is running cross-country and track at George Washington University, has vastly improved his times lately.

“And he doesn’t even like to run,” said Barry. Liam’s mother, Jennifer, who was one of the spectators that day, agreed, but added that, given his recent success, he was beginning to like it more.

Getting to the state meet this season may be iffy, for to do so Bonac’s boys would have to best Westhampton Beach, the top-ranked Class B team in the state, in the county meet on Nov. 5.

“They’ve won the counties the last three years in a row — their top three are terrific. We don’t match up right now, but we’re focused.”