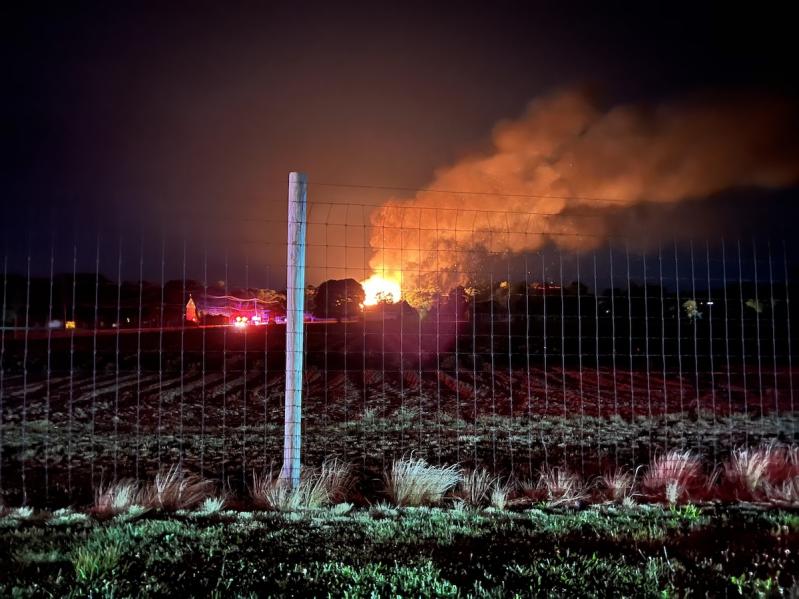 A view of the massive fire on Fair Hills Lane on Friday night.
Adrian Zajac
By Christine Sampson

The blaze that destroyed a house at 3 Fair Hills Lane in Bridgehampton Friday night had been "unfortunately burning for quite a while before anyone dialed 911," according to Nick Hemby, the Bridgehampton Fire Department chief.

Embers leapt from that house to its neighboring properties, and firefighters worked hard to prevent more serious damage. "It was so intense that the debris was carried up and down Fair Hills Lane," Chief Hemby said in a release issued late Sunday. "A large ember even landed on our supply hose, burning a hole in it." The hose had to be replaced.

In the end, 3 Fair Hills Lane was lost and three other houses damaged, one of them severely. Two of the three were occupied, but those people escaped safely. No injuries were reported, either to residents or firefighters.

It took at least 70 firefighters from nine departments about two hours to knock out the massive flames. Chief Hemby said crews remained on scene through much of the night checking for pockets of flames, and early Saturday morning firefighters were called back when floor joists, which had been burning underneath fallen debris, reignited the blaze. An excavator was brought in to move the debris so the hoses could reach the fire.

"We thank our neighboring departments for assisting with this massive effort," Chief Hemby said.

Having been nearby, an on-duty Southampton Town fire marshal was the first to arrive on the scene. The cause is still under investigation.