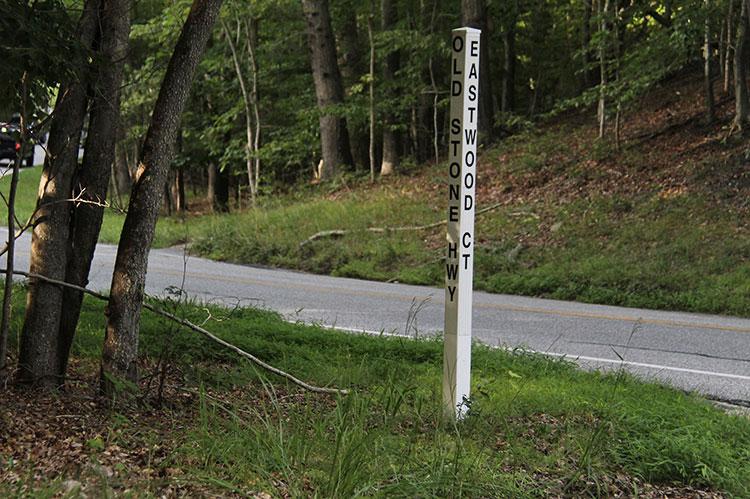 Devesh Samtani, 18, was struck by a car on the night of Aug. 10 while walking old a winding section of Old Stone Highway near Eastwoods Court.
Durell Godfrey
By Bella Lewis

The teenage victim of an Aug. 10 hit-and-run in Amagansett died on Friday from head injuries sustained in the accident.

Devesh Samtani, 18, of Hong Kong, had been headed to a party at 37 Timber Trail in Amagansett on Aug. 10. Some 800 to 1,000 people had gathered there by the time police arrived to break it up, East Hampton Town Detective Sgt. Daniel Toia said.

Town Police said 100 cars were parked on the forest line and on Timber Trail. A D.J. in a booth was set up when three town police officers arrived at 10:30 p.m. East Hampton Village police and town Marine Patrol officers arrived soon after to back them up.

People were reportedly departing peacefully, but there is always a risk when trying to corral so many stragglers, Detective Toia said, and the "mass exodus" of partygoers created more of a risk.

Daniel Campbell, 19, of Second House Road in Montauk had been driving a 2012 Honda Pilot, a midsize S.U.V., on Old Stone Highway in Amagansett to drop friends off at the party when he struck Mr. Samtani near Eastwood Court around 11:30 p.m., according to police. The road is winding there, with no shoulder and no streetlights.

Mr. Campbell fled the scene, police said, and Mr. Samtani was taken to Stony Brook University Hospital by Amagansett Ambulance. Meanwhile, witnesses relayed to police the plate number of the car Mr. Campbell had been driving. Without having been on site for the accident, Detective Toia estimated there were 50 to 100 people in the area at the time. Officers tracked the vehicle owners to their house in Montauk at 2:40 a.m. on Wednesday morning. The owners told them their son had been driving that night.

Mr. Campbell was interviewed at home, and determined to be sober, Sergeant Toia said. He was charged with leaving the scene of an accident with serious physical injury, a felony. He was arraigned virtually at 9 a.m. on Thursday, Aug. 19, at East Hampton Town Justice Court.

Justice Steven Tekulsky said cash bail did not seem necessary, however, he ordered some "non-monetary bail conditions to ensure his return." Mr. Campbell, represented by Edward Burke Jr., was to surrender his drivers license, passport, and have pretrial GPS monitoring.

Although suspension of driving privileges is not provided for in a single alleged felony charge for leaving the scene of an accident, Justice Tekulsky said his orders were "permissive suspensions" influenced by the alleged crime's gross negligence, recklessness disregard to life, and willful evasion of the state's lawful prosecution.

"Frankly, I think leaving a scene of an accident of this nature is sufficient to justify suspension of his privileges," said the judge. In discussing the surrender of his passport, Mr. Burke said it was possible that the document was at Mr. Campbell's Westchester home, where he grew up. Mr. Campbell is currently living in Montauk and working for the foreseeable future at his parent's store in the hamlet, both of which are factors that Justice Tekulsky said helped him avoid monetary bail. "If you drive in violation of my order and you are convicted of that, I'll send you to jail for that reason alone, do you understand that?" Justice Tekulsky said to Mr. Campbell. The defendant said he did.

The next virtual conference is scheduled for Sept. 30.

Julia Kramberg, 19, who hosted the party, with guests ranging in age from 17 to 21 and up, was cited for holding an unpermitted gathering and creating noise pollution.

In a Facebook post announcing Mr. Samtani's funeral service, which was held yesterday morning at Riverside Memorial Chapel in Manhattan, his family described him as "beautiful, handsome, kind, intelligent, and fun-loving."

Many at the funeral, which was also live-streamed on Zoom, had flown thousands of miles to attend. Friends and members of his extended family got up to speak about him, describing him as someone who was "always smiling," cheeky, and who lit up a room.

Mr. Samtani was supposed to begin his freshman year at New York University this fall, said a friend who spoke at the funeral and was also set to attend N.Y.U. She said Mr. Samtani had called her six times and then called her parents when he found out she had also gotten into the school. They had coordinated classes and planned trips around the city, she said.

His family said he had dreams of starting a hedge fund, and others who spoke promised him they would continue living life as he would have wanted them to do: working hard and enjoying themselves.

According to Newsday, before starting school Mr. Samtani and 13 family members were spending two weeks together at a rental in Sagaponack.

His aunt Jennifer Kurani, one of the relatives at the rental, told Newsday that Mr. Samtani had headed to the party in Amagansett after the family went out to dinner. Her son and his cousin, 17, was with him and was the one to call the family.

According to the Newsday article, Mr. Samtani "was a son of Kishore and Mala Samtani, the family entrepreneurs behind the Hong Kong-based 'As Seen on TV' manufacturers of gadgets -- nonstick pans, Ginsu-type knives, massagers and other household products," which are sold worldwide.

This is not the first time a teenage pedestrian has been killed on Old Stone Highway. In 2012, Jeffery Ahn, a 17-year-old student at Trinity High School in New York City, was struck and killed by a taxi driver while walking along the road in the afternoon.
--
Correction: An earlier version of this story incorrectly stated, based on information provided by the police, that the driver had been taken back to the scene of the accident early in the morning of Aug. 11 to be interviewed. That was not the case, police clarified on Thursday.