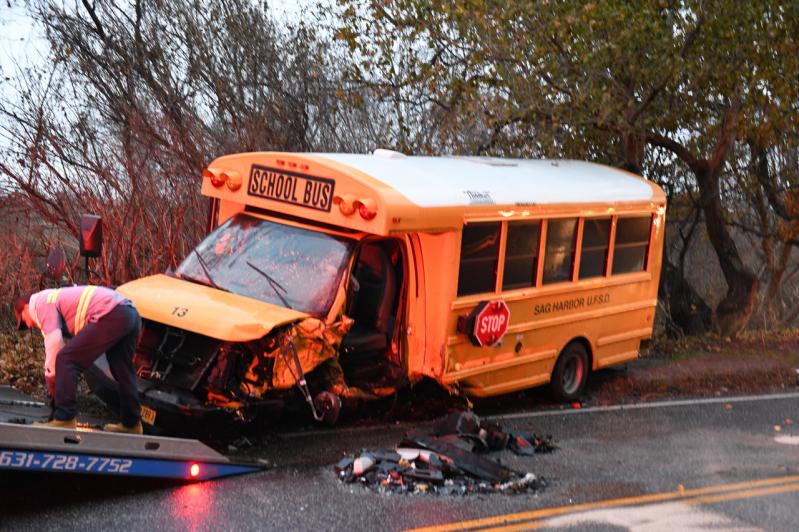 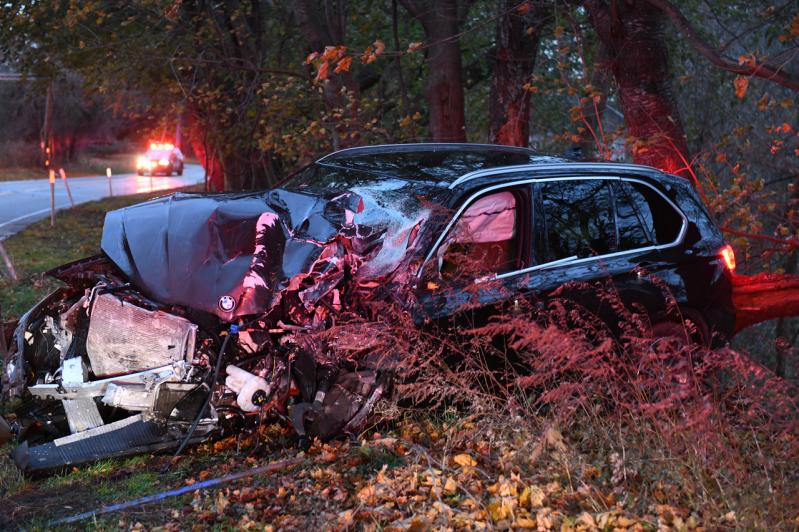 The bus driver of a small school bus, belonging to the Sag Harbor School District, had to be extricated due to the heavy damage on the driver's side.
Doug Kuntz

Police received a call at 3:06 p.m. reporting an accident involving a small school bus and a BMW X5 that had collided head-on on Scuttlehole Road, near the Atlantic Golf Club, according to Sgt. Eric Sickles. An elementary school student and a bus matron were the only passengers on the bus, said Sag Harbor School District Superintendent Katy Graves, who issued a statement that evening.

The front of the bus and its driver’s side sustained heavy damage, and the Bridgehampton Fire Department’s heavy rescue squad was called in to extricate the driver, Donna Skrezec, 58, of Speonk. Once she was freed, a Bridgehampton ambulance transported her to a medevac helicopter waiting at a nearby ball field on Deerfield Road in Water Mill and flew her to Stony Brook.

The bus matron and the student, whose names were not released, were taken to Stony Brook Southampton Hospital for non-life-threatening injuries, police said, as was the driver of the BMW, Pierre Delalio, 69, of Southampton.

The student was quickly released from the hospital that evening, according to Ms. Graves.

Detectives are investigating the accident, but no charges are expected, Sergeant Sickles said. No charges were filed as of Tuesday.

“As always, the safety of our students and staff is our highest priority. The police are conducting their investigation and the district will fully cooperate. We will also continue to stay in contact with those involved in the accident,” Ms. Graves said.

This week, Jeff Nichols, the acting superintendent as Ms. Graves has stepped down for medical reasons, said he could not release more information. “Due to confidentiality concerns, we are not at liberty to disclose personal medical updates.”

Scuttlehole Road was closed between the Mitchell Lane traffic circle and Hayground Road for several hours while police cleared the scene.

This story was updated with the version that appeared in print on Nov. 28, 2019.