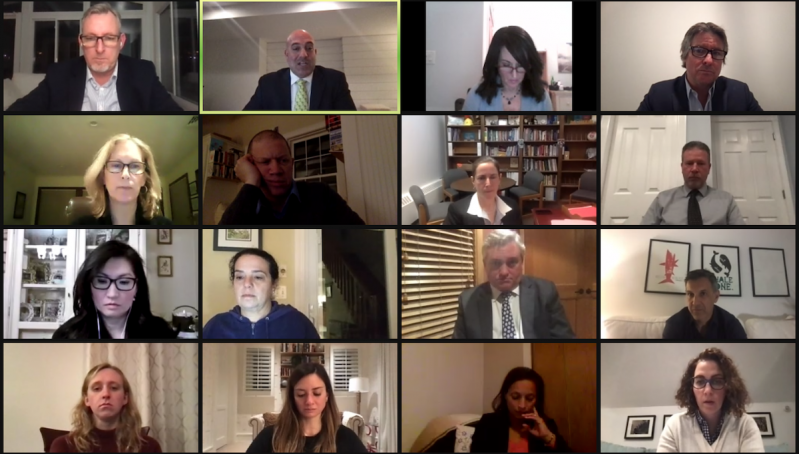 While meeting virtually on Monday night, the Sag Harbor School Board heard preliminary details of a plan to voluntarily test students and staff for Covid-19.
By Christine Sampson

The Sag Harbor School District on Monday unveiled a preliminary plan to begin administering Covid-19 tests to its students and staff members within the next two weeks.

Jeff Nichols, the Sag Harbor superintendent, said it is a voluntary effort on behalf of the district. No requirement has been placed upon the district by either the state or county to begin testing in order to stay open.

"My recommendation is to move forward and schedule a date for a private entity to come in and conduct those tests . . . in the next week or two, probably two weeks," Mr. Nichols said during a school board meeting on Monday night.

Specific information, and consent forms allowing the testing to occur, will be provided to the community soon, he said.

Under Gov. Andrew M. Cuomo's micro-cluster system, for yellow, orange, or red-zone schools to stay open during the pandemic, they would have to test certain percentages of their populations every month. However, some school officials have recently said they are seeking more clarity on how micro-cluster focus zones are designated and testing requirements are handed down, as "the goalposts keep switching," Mr. Nichols said.

Sag Harbor would become the second local district to institute a Covid-19 testing plan. The East Hampton School District did so in early and mid-December, finding zero positive results out of the approximately 300 tests that it gave to staff and students in partnership with Suffolk County. Farther west, Hampton Bays and Riverhead schools also conducted testing when those communities were designated yellow zones.

The district is planning to work with Enzo Laboratories, a private lab that has a license to conduct testing in school districts.

"I've spoken to the superintendents, who said they were excellent to work with and the process was pretty seamless," Mr. Nichols said.

The district would test 150 staff members and students every two weeks with PCR tests -- the type that is a nose swab rather than a nasal cavity swab, Mr. Nichols said. Tests would be covered by health insurance or, in case a person lacks insurance, it would be covered by the school district at a cost of $85 per test.

The only other potential cost to the district, Mr. Nichols said, would be busing students to an on-campus test site, the location of which has not been announced.

The initiative had support from the majority of the school board.

"I'm a supporter of proactively testing even if it's not necessary," Chris Tice, a board member, said. "It's a way for us that we can ensure the safest environment possible . . . and if there are issues, we will find out earlier."

Alex Kriegsman, another board member, lauded Mr. Nichols's initiative and said the school staff has been doing "an amazing job."

"These are really difficult decisions to make every day," Mr. Kriegsman said.

The testing announcement came roughly seven days after Mr. Nichols directed all classes to be held virtually for a week. The delayed return to school, coming on the heels of the almost two-week holiday break, bought the district some time as Covid-19 levels continued to fluctuate in Suffolk County.

"I believe that there was an increased risk" of school transmission after holiday gatherings and possible travel, Mr. Nichols said. "I believe that that risk dissipated significantly with one week passed. The second consideration was the test-positive rate in Suffolk County was in the 12 to 13 percent range. It seems to have leveled off. Today's reading is yesterday's data, but it was below 10 percent for the first time in a while. I would not read too much into that -- I think we are still in the throes of this, and it could creep back up."

Data released by Governor Cuomo on Monday showed the seven-day average of positive test rates in Suffolk at 10 percent. Of the 20,387 test results reported on Sunday, 1,546 (7.6 percent) were positive, and 13 deaths were attributed to Covid-19. There have been more than 1,000 new Covid-19 cases a day in Suffolk every day since Dec. 21, with a record high of 2,194 reported on Jan. 6. The highest number of cases reported during the first Covid surge in the spring was 1,569 on April 8, when a total of only 3,889 people in the county were tested.