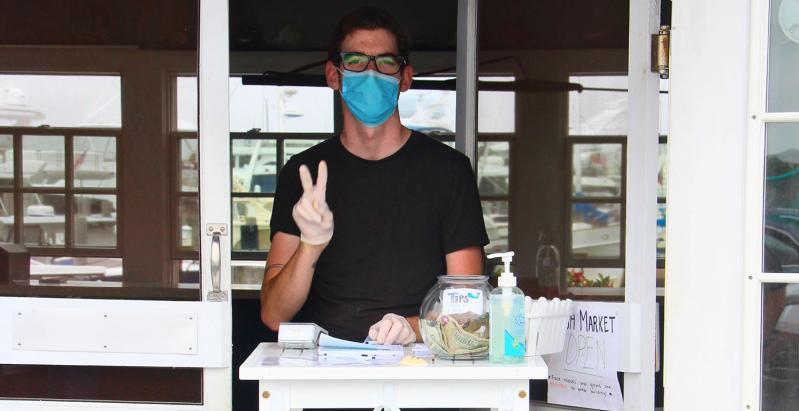 Taking orders at the Dock House in Sag Harbor. Because of the seasonal natureof many Long Island businesses, the financial impacts of the economic shut-down were particularly acute here, according to a study commissioned by Suffolk and Nassau Counties.
Durell Godfrey
By Jamie Bufalino

Long Island may lose up to 375,000 jobs and nearly $61 billion in economic activity this year because of the pandemic, according to a study commissioned by Suffolk and Nassau Counties.

During the first two months of the pandemic, 270,000 residents lost their jobs. It was the highest rate of job losses in the country at the time, the report from HR&A Advisors, a consulting firm, said. Weekly initial unemployment claims in the region rose from 1,500 on March 14 to 316,000 on May 16, an increase Nassau County Executive Laura Curran said was “the fastest rise in unemployment on record.”

The hospitality industry, which the report said was the region’s lowest-paying sector, posted the highest number of job losses — 68,500 — followed by 40,800 in retail, 35,400 in health care and social assistance businesses, and 28,700 in construction. The other industries with high job losses included manufacturing, personal services, and transportation and warehousing.

The study found that Hispanic and Latino employees, who make up 27 percent of hospitality workers, were disproportionately impacted by the economic disruption. Job losses were also “heavily concentrated” among workers earning less than $35,000 per year, and those without a post-secondary education.

Because of the seasonal nature of many Long Island businesses, the financial impacts of the economic shutdown were particularly acute here, the study said, and a “substantial number” of business owners found the federal loans provided through the Payment Protection Program too restrictive to be useful. Those who received the loans shortly after the program launched in April were required to spend the money within eight weeks even though their businesses weren’t allowed to reopen. According to Suffolk County’s Business Recovery Unit, 50 percent of businesses had closed temporarily, and 1 percent have closed permanently.

Due to reductions in consumer spending and ongoing supply chain disruptions, up to 105,000 additional job losses are expected through the end of the year, and losses will continue at a more moderate pace in 2021, according to the study.

The high rate of unemployment, and reduced earning and spending, have had a “devastating” impact on sales taxes. Suffolk County projects a loss of $165 million to $325 million in sales taxes this year, and $175 million to $225 million in 2021. “This report makes clear that federal aid from Congress is necessary if our region is going to rebound and recover from the worst economic crisis since the Great Depression,” said Suffolk County Executive Steve Bellone.

In addition to charting the economic impact of the pandemic, the study also offers insight into what a recovery might look like. It recommends that governments focus financial resources on “lower-income households and communities of color [that] may suffer from slower recovery rates” because of existing inequities, such as access to credit and opportunities, and affordable housing.

To foster economic recovery, it calls on the federal government to provide increased funds for local governments to prevent tax increases, layoffs, and cuts in services, for infrastructure construction projects as a means of boosting employment, for work force development and job training, and for small businesses and industries severely impacted by the pandemic. Because the economic disruption is likely to last for several years, the study also recommends extending unemployment benefits for workers.

It encourages local governments to streamline the approval and permitting process for “shovel-ready” construction projects, to develop revitalization strategies, and to partner with local businesses and institutions to develop on-the-job training programs.

The study projects different rates of recovery for different industries, with those directly affected by the ongoing health crisis lagging behind those who were primarily impacted by the economic shutdown. The first wave of recovery, it says, will be among the finance, insurance, professional and information services, and government sectors, which are expected to recover 95 percent of the jobs by the first quarter of 2021. The real estate, retail, agriculture, construction, education, health care and social assistance, manufacturing, wholesale trade, and administrative and waste management services industries will continue to lose jobs through the second quarter of 2021, and it will then take a year to recover 85 percent of the jobs.