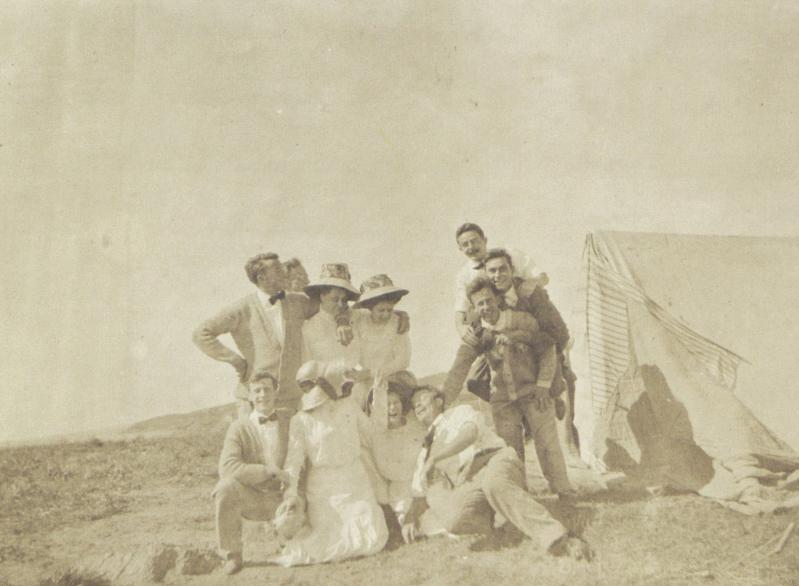 This photograph shows a group of young adults posed in front of a tent, presumably camping at Montauk. Based on the fit of the girls’ sleeves, the size and style of the hats, and the subjects’ ages, this photo and the others in the series were snapped around 1905 to 1907, meaning this picture was taken not too long after the Long Island Rail Road connected Montauk to the rest of the South Fork in 1895.

Only one person is definitively identified in this image: Nelson C. Osborne (1888-1967), a ninth-generation East Hampton resident who would serve as village mayor and later town supervisor.

Two people are named in other photos from the same series, Sybel Dominy (1889-1966) and James Mulford (1889-1972), both members of well-established East Hampton families. Sybel is probably the girl laughing next to Nelson, in the center of the picture, and James is in the middle of the group of boys in a piggyback. James went on to be director of the Southampton Lumber Corporation, while Sybel graduated from Juilliard in 1911. The two married in 1914 and raised two sons together. In the moment caught here, however, they aren’t married. The figures smiling, laughing, and posing aren’t mayors or businesspeople or pillars of the community, they’re just kids.

Though fashions and travel times may have evolved, it’s easy to imagine teenagers today playing with their friends in Montauk, adopting these same poses.

The most engaging part of this series is the candid nature of the images, which was unusual for the time. These teenagers are clearly enjoying a camping trip at the beach with friends; they pose for the camera but can’t stop laughing long enough for the picture to be taken. They’re leaning into each other and taking piggyback rides, delighting in the time they spend together in the sun.

Other photos in this series feature friends walking arm-in-arm, the boys all in a pyramid, and everyone gathered around a picnic on a low table. The whole collection carries a sense of fun that serves to remind the viewer of the humanity and relatability of the people pictured.