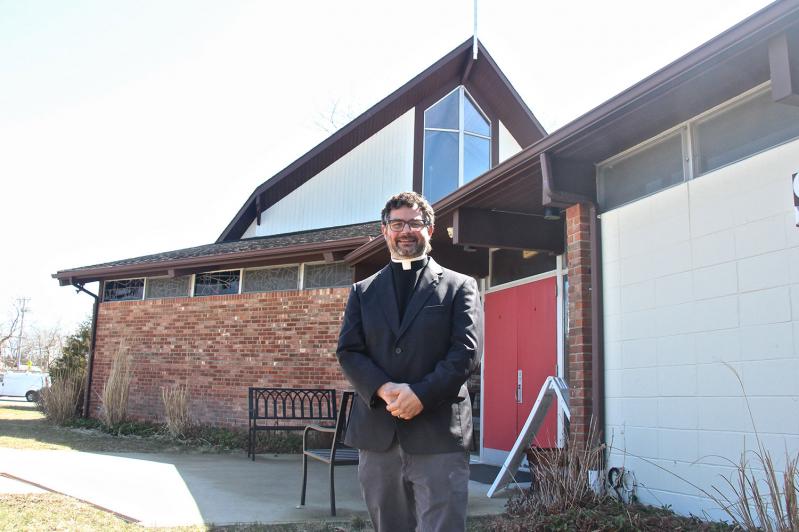 Services at St. Michael's Lutheran Church in Amagansett have been virtual during the pandemic. "It's great to have a church home," said the Rev. George Dietrich, "but our church family is our home."
Durell Godfrey
By Christopher Walsh

"Nearly 400 people braced a boisterous Sunday afternoon waiting for the doors to open at the new St. Michael's Evangelical Lutheran Church on the Montauk Highway at Amagansett," The Star wrote, 50 years ago today. "The church was filled to more than capacity for its dedication."

"I was there," said Joyce Flohr of Springs, a member, then and now, of the congregation. She confirmed The Star's 1971 account of St. Michael's dedication, which gave the congregation a permanent and more appropriate home than the American Legion Hall, which for several years hosted services.

"The new building follows the general architectural type of Lutheran churches, outwardly, and perhaps in its interior," according to The Star's March 25, 1971, issue. "There is no ornamentation, the walls and ceiling are of unadorned brick and wood, with lighting from windows let into the top of the walls, and the ceiling; the daylight shone on the carved wooden figure of Christ on the cross, high above the altar."

Longtime members, including Ms. Flohr and Marge Harvey of Montauk, spoke this week about the "small congregation with a big heart," a tight-knit group that has weathered the Covid-19 pandemic through virtual worship and prayer via Zoom and Facebook while continuing a mission to help the less fortunate and welcome all to take part in its offerings.

"The congregation loves each other," Ms. Flohr said. "We are concerned about what's going on in the world."

One material example of its mission is the 40 affordable apartments for those 62 and older that are situated on the church grounds. "We took down our parsonage in order to build that project," Ms. Harvey said of the complex, which was completed in 2012.

But the mission is also manifested in assistance for those facing financial hardship, soup dinners for which congregants try to create a restaurant atmosphere for guests, meals delivered to senior citizens during the pandemic, backpacks distributed to children locally and overseas, and more than 500 pairs of socks delivered to homeless people and shelters.

"We continue to do our ministries," said the Rev. George Dietrich, who has been at St. Michael's since 2017. The pandemic, he said this week, has served to remind the congregation that "it's great to have a church home, but our church family is our home."

A native of Spring Valley, N.Y., Pastor Dietrich attended the Lutheran Theological Seminary at Philadelphia. He served in southern New Jersey for around six years, he said, before arriving at St. Michael's. He is also the pastor of Incarnation Lutheran Church in Water Mill. "It's a fulfilling schedule, that's for sure," he said.

"I'm very fond of George Dietrich," Ms. Harvey said. "His wife and children are a delight. We're so thrilled to have them."

Pastor Dietrich is current in a lineage of pastors that began in 1971 with the Rev. Leonard Torcello and has included the Revs. Dennis O'Rourke, Robert Endruschat, Yvette Schock, and Katrina Foster.

"My husband was not a worshipping person at that point," Ms. Flohr remembered of 1971. On a visit to their house, Pastor Torcello "walked by me and shook Henry's hand and talked with him. When he left, he said to my husband, 'Will I see you in church?' and my husband said yes. He went to church for the rest of his life."

"For a small congregation, they do a lot in the community," said Ms. Harvey, whose late husband, also a pastor, preached at St. Michael's. "When they undertook this project for the senior housing, which was a major project, they had no funds to speak of. It was a small group of people, but they had a vision and were able to connect with the people at Windmill Village," the senior citizens housing complex in East Hampton, "who had done this in the past and helped us to see the process through. It's been such a blessing to the community."

For Susan Rossi of East Hampton, "I have never felt more loved or more welcomed in a congregation before." Ms. Rossi, who was raised Catholic, came to St. Michael's around eight years ago. "I walked in on a Sunday for worship and have been going ever since. It was just a wonderful, warm experience. The message from the pastor that day was 'God so loved the world,' and I felt like I was part of that world for the first time in my life."

Her involvement grew, and she is now a deacon. "When people ask me why, I don't have an answer," Ms. Rossi said. "I know God moved me to do this. I put one foot in front of the other every day, and this is where he brought me."

As part of her work with the church, she visits senior citizens who are unable to attend services. "Though it is difficult, it is also very rewarding," she said. "They get to have communion in their home and I pray with them, and for me, I'm getting to know amazing people who have beautiful stories to tell."

As spring dawns on the South Fork and Covid-19 vaccines are administered to more people, St. Michael's will manifest the rebirth symbolized by Easter with an in-person service.

"We are slowly phasing into that," Pastor Dietrich said of a resumption of those services. "We'll have the full Covid precautions," he said, "and want to be a good example of not tempting fate." A limited capacity, masks, and social distancing will be observed, and there will be no singing. "We've been calling it 'singing within,' " he said.

At 50, St. Michael's "really is a little church with a big heart," Ms. Rossi said. "It is the truth. We work hard at doing God's work with our hands."

A Reminder From PSEG About Digging
Petition to Speed Up Sand Replenishment in Montauk
Artistic Portraits of M.L.K. Up for Auction on Saturday
END_OF_DOCUMENT_TOKEN_TO_BE_REPLACED