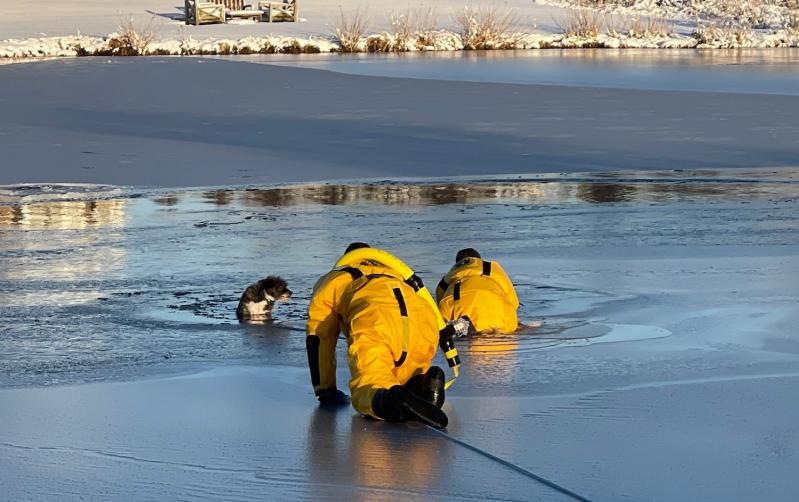 The East Hampton Fire Department put recent ice rescue training into action on Monday when a dog fell through the ice at Hook Pond.

A woman was walking her two dogs just before 7:30 when one of them, a 4-year-old rescue named Joey, ran onto Hook Pond in pursuit of some swans.

The East Hampton Fire Department responded with a dive team truck, heavy rescue, an engine, and a fire police unit. Donning protective suits, two members of the dive team went out toward the hole in the ice, 40 feet from shore, to rescue the 30-pound dog who "graciously walked back to shore after being removed from the water," said Fire Chief Gerry Turza.

Once Joey was out of the water, just 15 minutes after the call came in, paramedics confirmed he "was in good spirits and showed no injuries," Chief Turza said. Joey was warmed with blankets with the help of a paramedic from the East Hampton Ambulance and then returned to his grateful owner, who had also been supplied with some blankets to stay warm while she waited.

Chief Turza cautioned people to stay off of the ice and never to attempt to rescue any pets that may have fallen in the water, lest they risk falling through themselves. Joey's owner "did a great job by not going out to get the dog" and calling for help instead, he said.