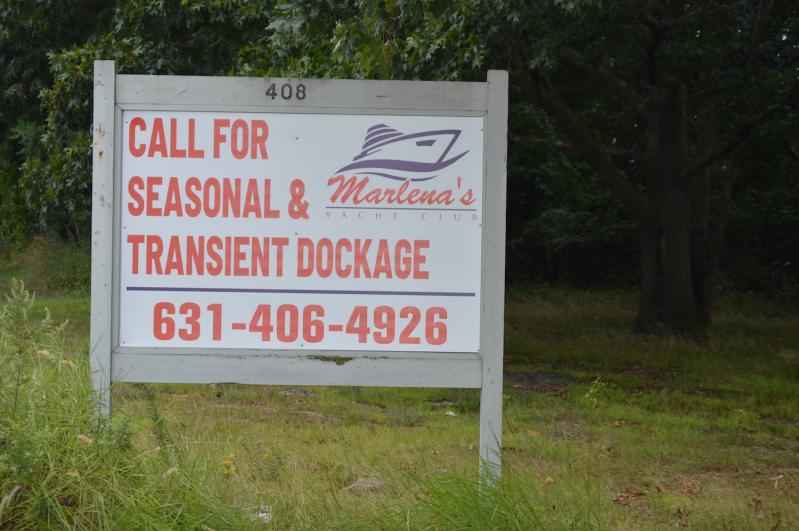 A sign at 408 West Lake Drive, the new Marlena's Yacht Club, advertises dockage at the spot that was once home to the Offshore Sports Marina.
Tom Gogola
By Tom Gogola

The cocktails will have to wait, but the boat slips are back in business. The Montauk mecca formerly known as Liars’ Saloon, which also was home to the Offshore Sports Marina, has a new sign out front from its new owner, Sam Gershowitz, signaling a new chapter is indeed afoot at 408 West Lake Drive in Montauk. The sign heralds the arrival of Marlena’s Yacht Club and offers a phone number and opportunity to rent a slip on long-term or transient terms.

The sprawling property has been undergoing a deep and vigorous cleanup, as promised by Alexander Gershowitz in early August, when The Star broke the news that Liars’ had been sold to his grandfather. Alexander is the general manager of the Star Island Yacht Club, which is also owned by his grandfather.

Oversize roll-off waste containers from the elder Gershowitz’s Gershow Recycling business have been a regular presence in the gravel lot, and workers have been on site pulling out and disposing of old dragger nets and other fishing-related gear amassed over the decades when Liars’ was atop anyone’s list of legendary must-visit Montauk watering holes.

A desiccated wood sportfishing boat seemed to appear out of nowhere recently, perhaps pulled from the weeds, and was most certainly destined for the junk heap of history.