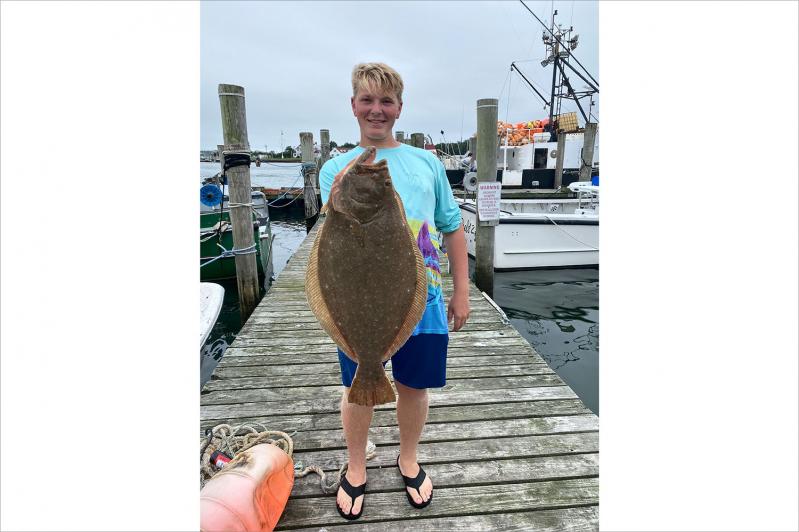 T.J. Wallace is the new leader in the Montauk Youth Fluke Tournament with his 13.86-pound flattie.
Capt. Tim O'Rourke
By Jon M. Diat

We are getting close to August and it's clear that the fishing scene has shifted into full summer mode. The ocean beaches are also now swimmable, with the water temperature approaching the magical 70-degree mark.

Want even warmer water? Take a dip in a nearby bay where 75 degrees is the norm in most spots. Better still, very few red jellyfish, those of the nasty, stinging variety, have been spotted. Another bonus for bathers.

And even better for those who fish: "You can probably name a fish, and there is a really good chance you can now catch it," Harvey Bennett said while trying to stay cool behind the counter at the Tackle Shop in Amagansett. "The waters have warmed up nicely."

The summer menu of fish includes everything from wahoo to swordfish, codfish to red hake, as well as dozens of other fish in between. Also on the long list are a number of different species of sharks.

Speaking of apex predators, Capt. Hugh Chancey of Chancey Charters had a close encounter with a small white shark on the fluke grounds a few miles south of Montauk late last week. It could have made for a nice segment for Shark Week, which came to a conclusion on Sunday evening on the Discovery Channel.

Captured on video for a few minutes, the six-foot shark enjoyed a breakfast treat by chomping down upon a dogfish at the surface of the water that was reeled in by one of Chancey's customers. Satisfied with its meal, the shark took off calmly, most likely looking for its next snack. A hammerhead shark was sighted later in the trip.

A day earlier in the same area, Capt. Paul Bruno of the charter boat Elizabeth II, decided to rig up for shark with a large bait on the drift while his fares focused on luring smaller quarry, such as fluke or sea bass, on hook and line. The captain figured that it was worth a chance with the easterly breeze and lots of bait in the water. The area looked fishy.

As if on cue, the experienced captain hooked and landed a 377-pound thresher shark. The feisty whip-tail was roped off after a 90-minute battle that took place in sight of the Montauk Lighthouse. Not to be outdone, his charter group the following day caught tuna.

"There is a lot of bait in the water and close to shore too," said Bennett. "I've even heard of false albacore and bonito being taken up to the west. Plus, there are whales, mainly humpbacks, along the ocean beaches, as well as lots of porpoises."

I can personally attest to seeing several pods of the aforementioned porpoises while on the east side of Gardiner's Island last week, before checking on my lobster traps. Despite their brilliant showing, the fluke bite for me that day was painfully slow; however, I caught a few sea bass for the table.

Farther offshore, the Viking Fivestar, after losing the last few trips due to poor weather, had an excellent excursion to the deep last weekend. On the pelagic side, the crew landed 26 yellowfin tuna, two bluefin and albacore tuna, as well as a pile of mahimahi, along with a huge bigeye tuna weighing in at 200 pounds. The strong-armed crew also reeled in a nice load of tilefish up to 38 pounds, as well as a couple of barrelfish and some white hake.

"Over all, it was a great trip with a fun group of guys, that went home with a bunch of fillets," said Capt. Steven Forsberg Jr., the skipper of the 65-foot craft that takes upward of 12 anglers out for offshore adventures.

Back in the bays, Sebastian Gorgone, at Mrs. Sam's Bait and Tackle in East Hampton, confirmed the good summertime action in his area. "Plenty of big porgies around, along with blowfish," he said. "And finally, I'm beginning to get some decent reports of fluke being taken on the east side of Gardiner's Island in 40 to 60 feet of water, as well as at Napeague."

Gorgone added that the action for striped bass has picked up along the ocean shoreline of late. "Some good reports have filtered back to me. There's a lot of bait in the water, too. And get those snapper poppers out. Small snappers can now be found at the local docks."

There is a new leader in the Montauk Youth Fluke Tournament, as T.J. Wallace landed a 13.86-pound doormat last week. While the competition lasts until the final day of fluke season on Sept. 30, it's going to be hard to beat out that flattie for first place. That said, there are plenty of prizes up for grabs for the other top four placeholders.