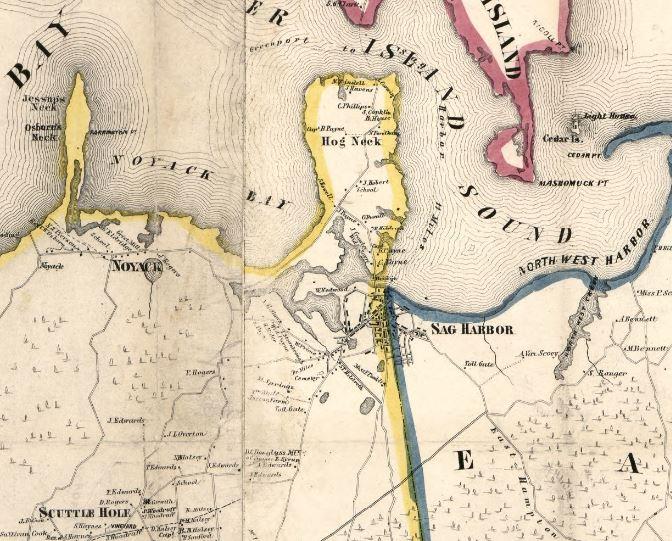 A detail of an 1858 map of Suffolk County by J. Chace.
By Baylis Greene

Turns out humble East Quogue was once towering Atlanticville. Quite the downgrade in nomenclature, wouldn’t you say? The town fathers of yore must’ve had their reasons. Like glomming on to the wealth and status of that village to the west, storied Quogue, where once dwelled the likes of the influential naval historian Admiral Mahan, who, speaking of naming things, coined the term “Middle East” back at the turn of the last century.

To what end, the change? Well, to the end of perpetual second-class citizenship, but it could’ve been worse. That is, in terms of loss of cachet while striving for it and in egregiousness of real estate boosterism. That honor goes to dull Hampton Bays, once evocative Good Ground. (Or would that be North Haven, a name born to be overlooked, which was once proud Hog Neck? Perhaps glittering Waterville, now dishwater Eastport?)

It’s not always the Babbitts of the world in charge of such decisions, although whoever lopped the “land” off “Hollywoodland” certainly had a sound notion, and the sign in the hills sure looks better. No, sometimes you can simply blame the postal service, in its otherwise admirable stabs at efficiency. Our North Fork brethren lost oh-so-local Oyster Ponds to weird Orient way back in 1863, but only because the mails sought clarity, apparently, separation, if you will, from the more known, the more important Oyster Bay.

And yet you can’t get much farther apart on this fair Island. And a pond is no bay. And if such distinctions were so crucial, why wasn’t a better job ever done with all the duplicated street names around here? Never mind East Hampton, where the doubling up is near legendary, do we really need a Wildwood Drive in Sag Harbor to be confused with a Wildwood Road over yonder in similarly 11963 Noyac?

If we’re going to refresh the public sphere, I’d say go ahead and take a cue from Quogue, where our young family once happened to rent a place on a certain Woodland Way, and tweak one of those Wildwoods accordingly, at least for the sake of the U.P.S. driver’s sanity. Except, I suppose, for the fact of Woodland Drive, which is, where again? Oh yeah, right next door on Hog Neck.

Hoedown on the Farm, Cocktails in the Garden
Main Beach Free Concerts in Final Weeks
Services and Counseling After Death of Popular Teacher Assistant
END_OF_DOCUMENT_TOKEN_TO_BE_REPLACED