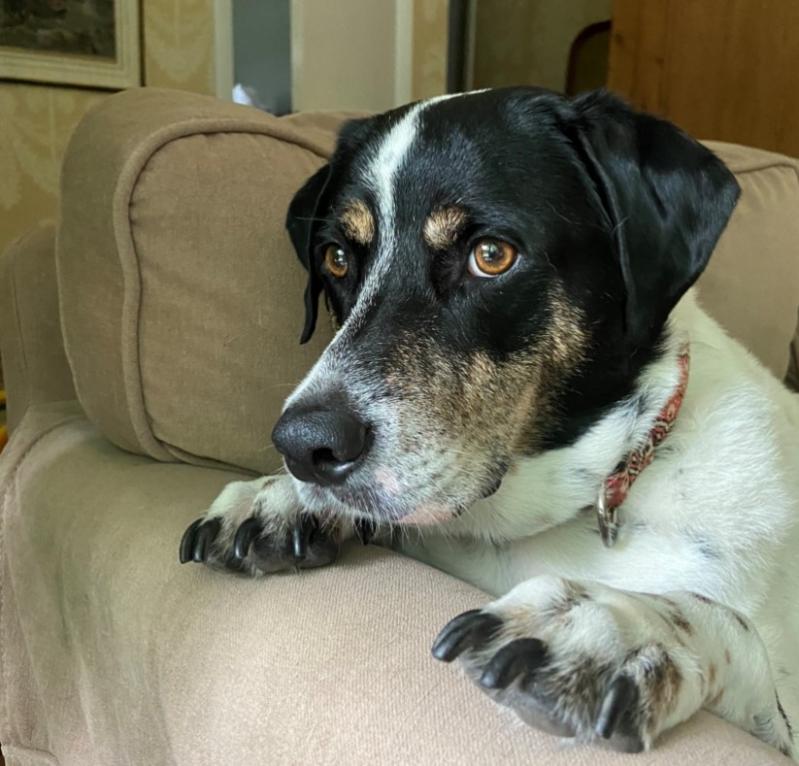 Duster at home, wondering where the family went.
Penelope Greene
By Baylis Greene

In a flurry of Herschel backpacks, checkered Vans, and red and blue Hydro Flask water bottles, the kids were out the door and off to the first day of school Monday. The dog and I were left staring at each other, stunned.

It had been six months of more or less homebound togetherness, first dominated by screen-time learning, then trips to the beach or town to meet friends (chauffeur: yours truly), a summer peppered with prompts-turned-nags about reading, and always meals, meals, meals.

I should’ve welcomed the sudden alone time but didn’t in the least, the silence ringing in my ears until the noontime “Fresh Air” interview over NPR provided some solace.

The good news? Hey, Sag Harbor — the kids like their teachers, all of them, apparently, middle school to high. I’d say way to go, but it’s more like I’m simply amazed. When did this happen?

I went to public school around here, Bridgehampton, to be exact, in the nearly medieval times of the 1970s and ’80s, and as an exception I will say that in fifth grade I very much liked Eugenia Humphries, whose wrists were adorned with so many silver bracelets their jangling would compete with the music as she strummed her guitar and sang for us. Good God, but she was cool. She had a habit of gently lofting a length of chalk at just the right trajectory across the room so as to land and break on the desktop of any unsuspecting student who’d made the mistake of drifting off into a daydream.

I wouldn’t say I had a schoolboy crush on her, exactly, but I do remember lingering after class one day to drop the name of some ’60s folk singer, just to show off what I knew. She was gone before her time.

Otherwise, no offense to anyone then involved and long since retired, but I don’t think the school was all that good in those days, educationally speaking. Low or no stress, to be sure, not like today, but not particularly happy or helpful either, merely something to be got through. Hell, I read “The Catcher in the Rye” on my own, after I’d graduated, if you know what I mean.

There are elements to be missed from the sleepy, tea-smoking old days and redneck ways, but for all the lamentable changes to befall the South Fork over the last 35 years, at least there’s more for kids to do through the schools, program and extracurricular-wise, the praise and enumeration of which I’ll skip, as they’ve now been blown out of the water by confounding Covid and the curiouser lack of any adequate federal response.

Good luck to everybody this school year.