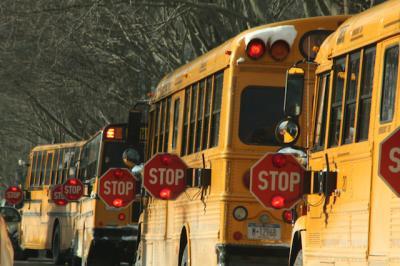 A plan to build a school bus depot on nearly three acres of land adjacent to the recycling center on Springs-Fireplace Road in East Hampton can move forward, following the East Hampton Town Planning Board’s conditional approval of a lot line modification for the parcel on April 3. The East Hampton School District, which will operate the depot, agreed to buy the land from the town for more than $2 million in 2017. A lot line modification was necessary, however, before the sale could be finalized. Planning board members, who are usually asked to assess the impact of proposed development on neighborhoods and/or the environment, struggled with the limitations placed on them by the deal. John Jilnicki, the board’s lawyer, pointed out that the school district had already completed an environmental assessment, including a traffic study, and found that the depot would have no adverse effects. “Frankly, I think you’re bound by it,” he said.The board will also have no say in how the parcel is developed, since the State Education Department has its own procedures for site plan review.“The horse has left the barn,” said Kathy Cunningham, the vice chairwoman. The town board had erred, she said, by not making site plan approval by the planning board a condition of the property’s sale. Since her board had been deprived of its usual oversight duties, she said, she will send the town board a “wish list” of suggestions for how the property should be developed.    For instance, the proposed site for the depot once contained a scavenger waste plant, and Ms. Cunningham said she wanted to make sure the groundwater would be protected. Kim Shaw, the town’s environmental protection director, had assured her, she said, that the town had cleaned up the toxic spills that had occurred there. The planning board also had concerns about the depot’s effect on traffic on Springs-Fireplace Road, which is notoriously congested around that area. Ms. Cunningham said Councilwoman Kathee Burke-Gonzalez had told her the town would conduct a comprehensive traffic study of the corridor. Ms. Cunningham also requested that solar panels be installed on the bus depot building, and that the school district agree to add vegetation and a rain garden to the property. Randy Parsons voted against the lot line modification. He said the town and the County Highway Department needed to provide more information on the safe flow of traffic.Ian Calder-Piedmonte abstained from voting. He had procedural objections to the town’s application, which, he said, did not adhere to the same standards the board applies to other applicants. For example, he said, a map of the site did not bear the signature and seal of a land surveyor, which would attest to its accuracy.Samuel Kramer, the planning board’s chairman, agreed that such a map was necessary, but rather than delay the vote he suggested that approval of the lot line modification be conditioned on the receipt of a signed and sealed map.The board also conditioned its approval on the sale of the land taking place within 18 months, and on the County Department of Health Services putting its seal on the sale and on any improvements made to the site.