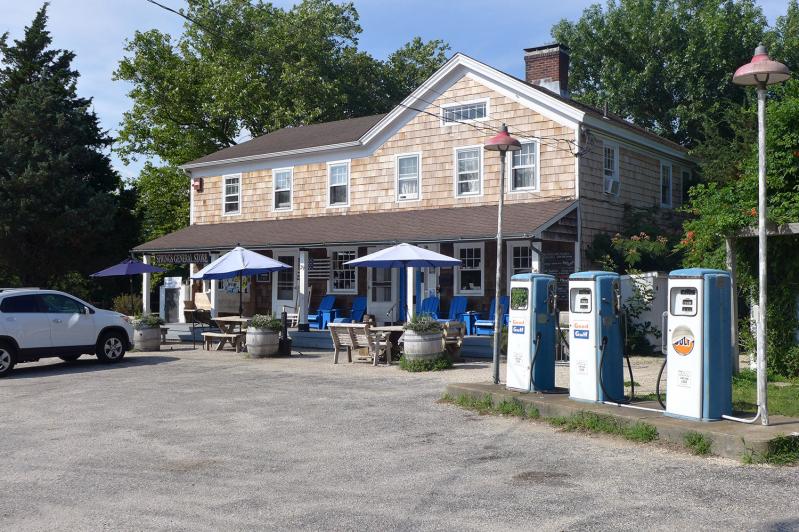 John Bennett, the new owner of the Springs General Store, has applied for an on-site consumption license from the State Liquor Authority that would allow people to buy and drink wine there.
Jamie Bufalino
By Christopher Gangemi

“I was concerned I was going to be tarred with a brush that we . . . wanted to stay 100 miles from,” said John Bennett, the new owner of the Springs General Store, at last week’s East Hampton Town Planning Board meeting.

“I have no tar, I have no brush,” said Ian Calder-Piedmonte, a board member. “I’m not doubting your intentions.”

“It’s one thing if it’s a wine shop where people go in, buy a bottle, and go off on their way. It’s another thing if the business is being structured around the idea of buy a bottle and sit down and drink it,” said Samuel Kramer, the chairman of the planning board.

Louis Cortese, another board member, described it as “application creep,” and mentioned other sites that started out as a dry goods retail shop but practically ended up as a night club, “At each phase it becomes harder to deny them because of what they were previously,” he said.

“You’re trying to get an approval for one thing, but it’s morphing into something that we didn’t think was being applied for,” said Mr. Cortese.

“When we saw the pre-submission here, our understanding was that it was a retail store,” said Mr. Calder-Piedmonte. “I do think that live music, on-site consumption really does change the project.”

But Mr. Bennett pushed back hard on the idea, at times growing angry with the board. “All of these places that have morphed, their certificate of occupancy had some sort of restaurant or bar use. That can’t happen here, it’s a retail store. . . . This cannot morph into some of these nightmares,” he said. “Any other restrictions or guidelines you want to put on this to make sure it can’t morph into that we embrace.”

At another point he said, “The last thing we want is a sleepy establishment turning into a club.”

The Springs General Store, which would be owned by Mr. Bennett’s two sons with two additional partners, has sought to swap out the kayak use at the site for a small wine shop, which they plan to locate in an existing shed. They also want to add an indoor table to the store and maintain three outdoor picnic tables for patrons. The store is considered by the Town of East Hampton to be a historical site.

“Full disclosure, I used to own the Springs General Store,” said Sharon McCobb, a board member. “I’m the one who got the kayak permit, so I’m a little sorry to see that go after three years of working on that.”

“We’re trying to turn it into a little bit more of a higher end purveyor,” said Mr. Bennett.

He said they had discussed having jazz on Sundays, but that the store is “certainly not going to be some sort of magnet for special events.” But the idea of jazz playing and patrons buying and drinking wine at picnic tables drew concern from Ed Krug, another board member.

He said Mr. Bennett had tried to characterize the store as “a sleepy little establishment, and that’s not what this is.” He said it was a community center and that in the mornings, in the summer, and on weekends “it’s heavily subscribed.” He said while the business is allowed 16 seats, code has never been enforced at the site, and many more people gather.

Randy Parsons, another board member, wondered how the single toilet in the store would fare against a bunch of people outside at picnic tables drinking wine and beer. When people drink, “they have to pee frequently,” he said. “The site can’t handle a lot more people using that one bathroom. . . . It’s overload. That’s where I’m at right now.” The good news, regarding the septic at the site, is that Mr. Bennett has agreed to voluntarily upgrade to a low nitrogen system.

The second biggest issue, apart from the on-site consumption of alcohol, was the placement of an Americans with Disabilities Act-approved parking space. Mr. Bennett currently has it placed behind the store. “The parking space has to be in front,” said Mr. Calder-Piedmonte. “We want to make sure anyone who visits feels welcome. . . . A.D.A. is a matter of law, it’s not our discretion.” The board agreed to refer the matter to the A.D.A. committee to get its input before deciding on that matter.

“There’s a reason why we spent an hour and a half on this single application,” said Mr. Kramer. “That’s because we all recognize the significance of the Springs General Store to this town.”

He acknowledged the frustration of Mr. Bennett but said the job of the planning board is to “avoid changes that are not anticipated, maybe by a future owner.”