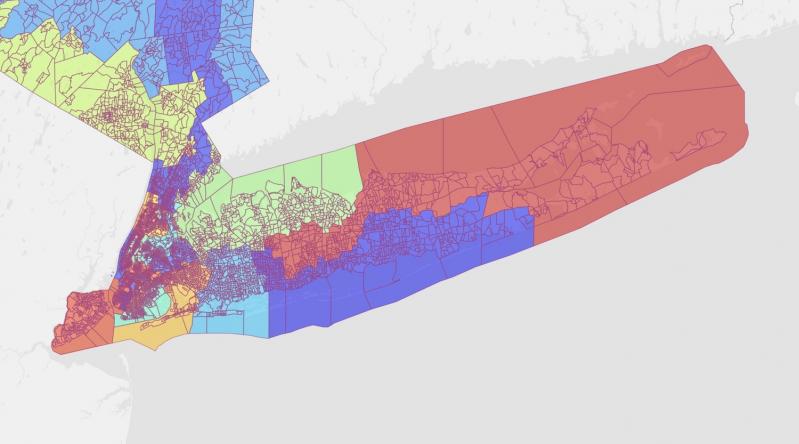 New York State's congressional and State Senate district maps were redrawn by a neutral expert and may be finalized this week.
davesredistricting.org
By Christopher Walsh

New York's First Congressional District would grow slightly, to its north and west, under a proposed map drawn by a neutral expert tasked with redrawing the state's congressional and State Senate district boundaries.

The expansion, which would see the district's western boundary edge farther into Smithtown, is a minor component of Monday's otherwise explosive issuance of maps drawn by Jonathan Cervas, of the Institute for Politics and Strategy at Carnegie Mellon University. He was appointed by the State Court of Appeals last month after the court ruled that the state's Democratic-controlled Legislature had redrawn the districts in violation of the State Constitution. Consequently, New York's primary elections have been postponed from June to Aug. 23.

If adopted, Mr. Cervas's map appears likely to encourage Republican gains in Washington, D.C., in November's midterm elections, possibly resulting in a G.O.P. majority in the House of Representatives as well as the Senate. The redistricting could also force some longtime incumbent Democrats in New York's delegation to run against one another.

That would represent a significant backfire for Democrats in the State Legislature, who in February voted to redraw districts following an ultimately futile bipartisan attempt. Under their proposal, Democrats stood to gain three seats in Washington. That would have meant 20 safe seats for them in New York's congressional delegation, just four safe for Republicans, and two competitive seats.

Dave Wasserman, U.S. editor of The Cook Political Report, wrote on Twitter on Monday that under Mr. Cervas's redrawn maps, there would likely be 16 safe Democratic seats versus five Republican seats and five highly competitive seats. However, he suggested in a separate tweet, "it's not hard to envision a 16D-10R (or even 15D-11R) split" should Election Day go especially well for Republicans.

But Nate Cohn, The New York Times's chief political analyst, also writing Monday on Twitter, noted that just five districts under Mr. Cervas's proposed congressional maps had been won by Donald Trump, and that those maps are "pretty close to a best case outcome for Democrats. . . . Many competitive Biden-tilting [congressional districts], but all voted more for Biden than [the] nation as a whole."

The First Congressional District is up for grabs, with Representative Lee Zeldin, a fourth-term incumbent, seeking the Republican Party's nomination for governor of New York. Under the Democratic-drawn map, the district would not only have expanded west to encompass more Democratic-leaning territory but also would have lost the Republican-heavy western part of Southampton Town to the Second District. Where the First District once spanned the five East End towns, Brookhaven, and part of Smithtown, it would have stretched into Nassau County, encompassing parts of Islip, Babylon, Huntington, and into Oyster Bay, apparently concentrating more Democratic-leaning voters.

Instead, under Mr. Cervas's redrawn boundaries, it would look much as it does today. A two-day public comment period on his proposed maps ended yesterday, and he is to submit final maps to the court by tomorrow.

Should Mr. Cervas's maps be adopted, at least one Democratic candidate in the First C.D., Jackie Gordon, will live outside it. Ms. Gordon, a former member of the Babylon Town Board, lives in Copiague, an unincorporated hamlet within Babylon and within the boundaries of the Second District as proposed by Mr. Cervas.

"As I have said throughout this campaign, I am running to represent my home community and will run in the district I live in," she wrote on Twitter Monday.

"I am encouraged by the new lines drawn by the independent court-appointed special master," said Anthony Figliola, a candidate for the Republican nomination. "This district is crucial to the Republican Party retaking Congress and being a check on Biden's failed economic and social policies, which has left so many families struggling to survive. Unlike some would-be primary challengers, I won't have to drive 45 minutes from my home to campaign in this district, because I was born and raised here."

The redrawing of congressional and state legislative districts follows the decennial U.S. Census. New Yorkers voted in 2014 to create the Independent Redistricting Commission, to introduce greater independence to the redistricting process; conduct rational line-drawing, and protect minority voting rights. But the commission, comprising an equal number of Democrats and Republicans, could not agree on a redrawn map, and the matter was relegated to Albany, where Democrats hold a majority in both the Assembly and the Senate.

Republicans accused the Legislature of gerrymandering -- manipulating electoral boundaries to favor one party over another -- which is practiced in many states and by both major parties. On March 31, a State Supreme Court Justice in Steuben County declared all of the redrawn legislative district maps unconstitutional, blocking their use. In April, the Appellate Division issued a stay, temporarily keeping the maps in place for the upcoming primary and general elections.

But, in a split decision on April 27, the Court of Appeals sided with the Republican complainants. Following the stalemate within the Independent Redistricting Commission, "the Legislature responded by creating and enacting maps in a nontransparent manner controlled exclusively by the dominant political party," Chief Judge Janet DiFiore wrote.

Having determined that the Legislature failed to follow constitutional procedure and instead drew district lines with "an unconstitutional partisan intent," the court declared the maps void. "As a result, judicial oversight is required to facilitate the expeditious creation of constitutionally conforming maps for use in the 2022 election and to safeguard the constitutionally protected right of New Yorkers to a fair election."

That decision led to Mr. Cervas's appointment. He has served as the redistricting consultant for the Pennsylvania Reapportionment Commission, according to his website, and as the assistant to a federal court-appointed special master in drawing remedial maps in three redistricting cases involving minority rights.

In an email on Tuesday, Mr. Cervas said he could not comment on his proposed maps, "since I am an agent of the court and this is litigation."