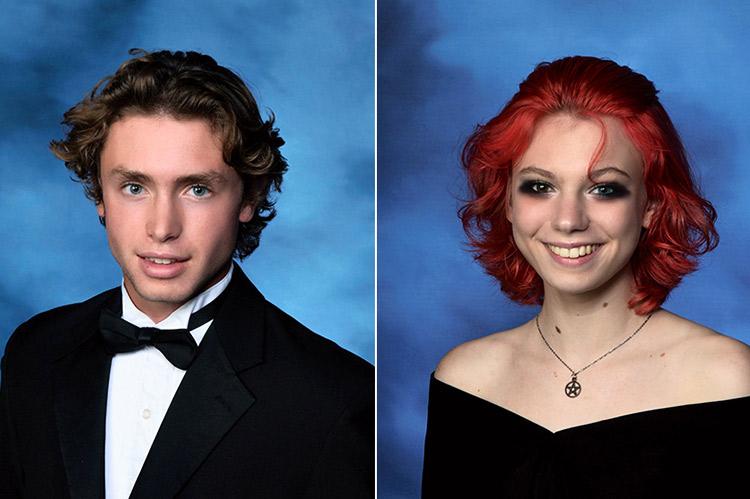 Evan Masi and Anika Petruccelli are the valedictorian and salutatorian of East Hampton’s class of 2022.
By Christine Sampson

High school graduations are about three months away, giving the valedictorians and salutatorians plenty of time to work on their speeches. At East Hampton High School, those speeches will be given by Evan Masi, the valedictorian, and Anika Petruccelli, the salutatorian.

Evan, who is from Amagansett, has taken East Hampton’s elite Methods in Research course through the State University at Albany, a pre-college architecture course through Cornell, which he will be attending in the fall, and several Advanced Placement courses, earning top marks. He is president of the school’s student council and the Sources of Strength club, and has taken part in volunteer efforts including soup kitchens, horseshoe crab monitoring, and surf lessons for children with disabilities.

A decorated athlete, Evan was captain of the cross-country team and works as a lifeguard and surf instructor. He has also worked for his father’s Bates + Masi architecture firm.

Anika, who is from East Hampton, also took Methods in Research and has won many awards for accomplishments in math and the sciences. As a junior, she received a National Merit Scholar Letter of Commendation and has completed over 100 hours of community service, including with the Retreat, the Ladies Village Improvement Society, and the Y.M.C.A. East Hampton RECenter.

Anika is an accomplished singer and dancer, captain of the varsity dance team, a performer in and choreographer for school musicals, and a member of the Camerata and Bella Voce select choir groups. Anika will attend Brown University in the fall.

Mashashimuet Park's History and Future
A Conference for Young People to Create Solutions
Get Outside, Get Moving
END_OF_DOCUMENT_TOKEN_TO_BE_REPLACED