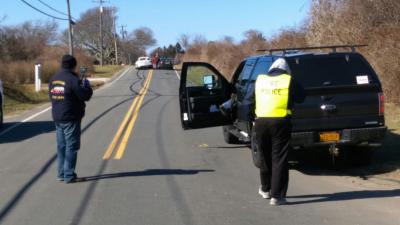 The Montauk Fire Department's fire police personnel have kept a portion of East Lake Drive closed after a machinery accident at the Montauk Lake Club and Marina.
Morgan McGivern
By
Taylor K. Vecsey

Mr. Duarte-Roque was "actively assisting the forklift operator in guiding/moving the dock material at the time the accident occurred," police said in a statement.

The equipment operator's name was not released. Police previously said no criminality was involved.

Police impounded the Traverse telehandler for a safety inspection, and the investigation is ongoing. Anyone with information is asked to contact police at 631-537-7575.

Update, 3:03 p.m.: A man who was run over in Montauk on Thursday morning by a piece of machinery has died from his injuries, East Hampton Town police said.

Sgt. Chelsea Tierney said the 44-year-old man, a Hampton Bays resident, was run over by a mobile lift as it was moving material in the road in front of the Montauk Lake Club and Marina on East Lake Drive. She was unsure what type of material was being moved, but said that workers were involved in the construction of a dock at the club.

The man was treated by emergency medical personnel with the Montauk Fire Department. County paramedics were flying him in a helicopter to Stony Brook University Hospital, a trauma center, when his condition deteriorated. The helicopter landed in Southampton, where it was met by an ambulance. The victim was taken to Southampton Hospital, where he was pronounced dead.

Police did not release the victim's name pending notification of his family.

The area remains closed to traffic as detectives conduct a full accident reconstruction, as part of their investigation. However, "it's not criminal in nature," Sergeant Tierney said.

Investigators with the Occupational Safety and Health Administration will also investigate the fatal accident.

Originally, 12:16 p.m.: A piece of machinery seriously injured a person at the Montauk Lake Club and Marina in Montauk on Thursday morning.

East Hampton Town police detectives are investigating the accident, which involved a piece of equipment believed to be a telescoping lift that was doing work at the private dock.

The Montauk Fire Department was called to 211 East Lake Drive at 10:52 a.m., according to East Hampton Village Police Chief Gerard Larsen, who oversees the dispatchers that took the 911 call. The caller reported a person had been "runover by a piece of machinery."

A portion of East Lake Drive was closed between Homeward and Pocohontos Lanes.

Police were not immediately available for comment. Check back as more details become available.