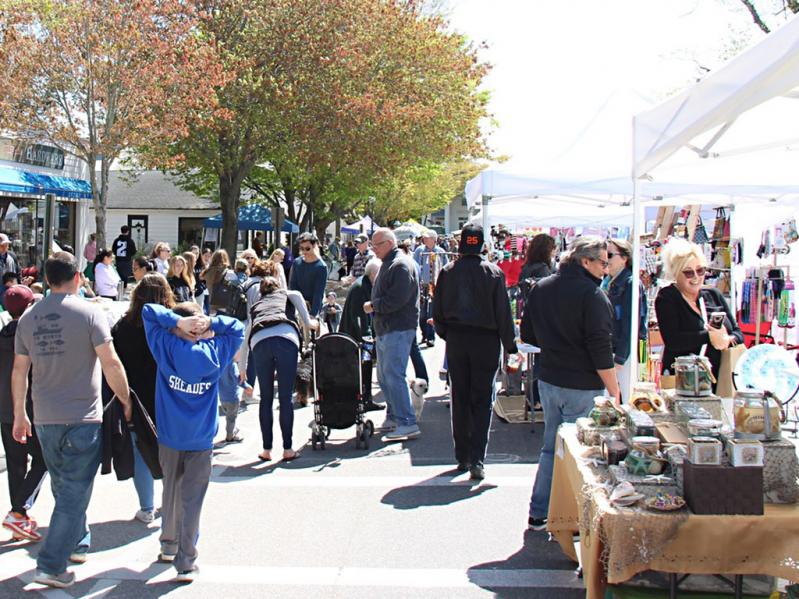 Newton Lane in East Hampton Village during a street fair that some retailers said killed their business for a day.
By Jamie Bufalino

The owner of a Montauk retail store, saying that the hamlet’s street fairs are having a devastating financial impact on local businesses, asked the East Hampton Town Board on Tuesday to stop issuing permits for them during the summer.

Peri Allen, the owner of Shark Bites, a women’s clothing and gift store, said the dearth of sales at her business over the Memorial Day weekend, when the annual Montauk Art Show was held on the village green, had motivated her to speak out.

“People go to spend their money there rather than the shops,” she told the board. She said two window shoppers that weekend had told her that, after having spent money at the fair, they could no longer afford to buy a dress at her store. “No retailer wants to hear that,” she said.

The art show, whose vendors are primarily from out of town, has become competition because far more than paintings and photographs are on sale, said Ms. Allen. “When it was an art fair I thought it was great. Now it’s a craft fair,” she said, explaining that people were selling hats, trinkets such as glass animals, and jewelry, all of which are items that retail shops in town offer. “How can East Hampton take revenue from local families and give it to some businesses from elsewhere during our holiday weekends?” she asked.

The Montauk Artists Association, which organizes the fair, has rules governing the type of merchandise that can be sold. One of the regulations states that “art made from ready-made items like clothing, commercially dyed material, or furniture, with painted, dyed, or batiked embellishments, will not be accepted.”

The hat vendor referenced by Ms. Allen was a last-minute addition to the show, said Anne Weisman, the event’s director, and had not observed the rules.

“Now I’m afraid I won’t get the next permit,” said Ms. Weisman, when informed of Ms. Allen’s appearance before the board. The Memorial Day weekend art fair as well as one held in August are main sources of funding for the artists’ association, she said.

The complaint from Ms. Allen echoed East Hampton Village retailers’ response to the spring fair held on Newtown Lane on May 11.

“Everybody on Newtown Lane said it impacted their business,” Donald Hor­owitz, a co-owner of Wittendale’s Florist and Greenhouses, told the village board at a May 17 meeting. “A couple said they had no sales, or practically nothing.”

Ms. Allen said the Montauk Music Festival, which used to be held on the village green before moving to its current venue at the lighthouse, had been a boon to businesses because it brought potential customers to the area and didn’t have a retail component. The other fairs, she said, take customers away. Furthermore, she said, the hamlet is crowded enough on a holiday weekend. “Maybe 20 years ago it would have helped to bring people to Montauk,” she said. “But now it doesn’t make sense.”

Another threat to local businesses, said Ms. Allen, was the increasing number of pop-up stores held at hotels, bars, and restaurants in the hamlet. The pop-ups feature merchandise from national brands and “local shops cannot compete with the big brands,” she said. She encouraged the town board to “stop pop-up shops in places of business that are not zoned for retail.”

Town Councilman David Lys agreed that pop-up shops should be more tightly regulated, and Supervisor Peter Van Scoyoc told Ms. Allen that the board would take her comments into consideration when weighing whether to issue permits for future fairs.

David Gruber, a candidate for supervisor in the election to be held on Nov. 5, took the opportunity to tout his support for local shopkeepers. “It’s very easy to lose sight of the fact that the people who live here year round need to be able to make a living,” he said. “I think you’re aware this is an election year, and I rise only to say, in order to put the maximum amount of pressure on you to respond as quickly as possible, I support absolutely and completely everything Ms. Allen had to say.”