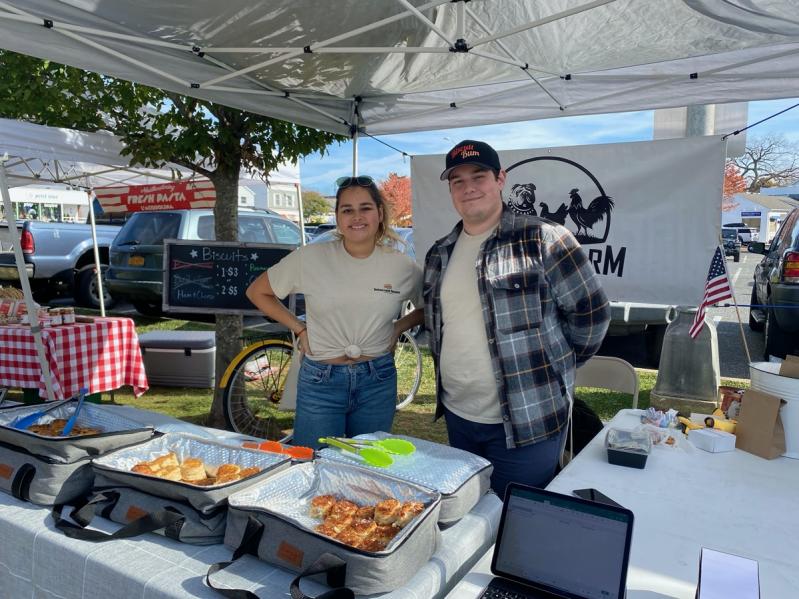 Biscuits -- those puffy, flakey, pale quick breads from the South that go with everything from sausage to jam -- are staples in many a Thanksgiving meal, and Biscuit Bum's cranberry biscuit, picked up at Sunday's farmers market in East Hampton, definitely deserves a place on the Thanksgiving table.

Joshua Rosario is the South Fork's official Biscuit Bum. The 25-year-old Culinary Institute of America student and graduate from East Hampton High School began his home baking enterprise last fall. His biscuits -- plain, rosemary, cranberry, and ham and cheddar were available on Sunday -- are baked in his family's kitchen on Gingerbread Lane. They offer the perfect combination of crisp edges, flaky layers, and a soft, buttery internal crumb structure. They are so crumbly, in fact, that it's advisable to eat them at home, on a plate, not, as this writer discovered, in the car, as most of it ends up in between the upholstery.

Biscuit Bum is now accepting orders for Thanksgiving. All four varieties are available for pre-order but Mr. Rosario recommends the cranberry one. "Due to it matching the flavors of Thanksgiving."

His biscuit story began in 2019 with a four-month internship at the East Hampton Grill as part of his culinary studies. (Originally a student of applied physics at New York University, Mr. Rosario switched to culinary arts in 2018 and is currently studying culinary science.) At the East Hampton Grill, which consistently receives rapturous reviews for its "heavenly biscuits," the pastry chef decided that his protege should learn the secret to a really good biscuit.

When he came home from school last fall, the farmers market in East Hampton was back in business after the pandemic shutdown. His mother, who has 16 backyard chickens, had a stand selling eggs and tote bags. She asked her son if there was anything he would like to sell at the stand, to which he replied, "I know how to make biscuits." He sold out on the first day.

Like most good baked items, there's sorcery involved in their making. The quality of the ingredients is key, and Mr. Rosario insists on using the finest butter. It's also necessary to keep the ingredients as cold as a freezer and to touch them as little as possible. "It's really important not to overwork the dough," he said. (Any fan of the Netflix series "The Great British Bake Off" will understand this reference.)

During the summer, when he was making around 400 biscuits for the market, he was forced to wake up at 4 a.m. every Sunday to form the dough and bake batches of about 35 to 40 in his home kitchen. Today, he makes about 150 to 200 biscuits each week, meaning he can sleep in until 6 a.m. He has to travel home every weekend from Upstate New York in order to bake and sell his goods.

The resulting biscuits are gorgeously tender, modest morsels -- slightly smaller than the Southern version -- simultaneously crumbly and fluffy with tender, internal layers. External layers are visible, too, giving each one a craggy and unruly, lopsided look. The tops and bottoms are crusty and slightly burnished, with only a hint of sugar in the dough. Plain biscuits with vegan butter are available. But, it was the cranberry and the ham and cheddar -- topped with flakes of sea salt -- that were winners, providing a perfect balance of salty and sweet. As for the calorie content, you dare not ask.

Thanksgiving orders will need to picked up at his Village Farm stand at the East Hampton Farmers Market, in Herrick Park, on the Sunday before Thanksgiving.

"So, the one thing I love about the biscuits, is how well they do after they've been baked" he replied, after being questioned about their freshness five days after baking. "I've done tests and I've put myself into the line of fire for this. The biscuits freeze extremely well. And they last really well on the counter. I have plenty of people who have told me that the biscuits taste better three days later because the butter starts to solidify inside and this gives it serious texture when you bite through it." He suggested heating them up for a minute in the microwave or five minutes in the oven.

Does he plan to turn his spare-time passion into a profitable enterprise?

His first weekly standing order came from the Baker House 1650 bed and breakfast in East Hampton: two dozen Biscuit Bum biscuits every Sunday, which are now featured on the brunch menu. He has also been approached for wholesale orders and to join other outdoor markets, like the one in Springs.

"I can't really produce at that level right now, even though I really want to," he said. "It's just me baking in a home oven. I really want to grow the business to a point where I can actually buy bigger equipment and increase the supply."

He's also developing a Biscuit Bum website and hopes to find an industrial designer to help create packaging for the biscuits so that he can take mail orders.

Celebrate Hanukkah All Across Town and at Home
Stuffed With Turkey? Walk It Off
Blood Drive Tuesday in Bridgehampton
END_OF_DOCUMENT_TOKEN_TO_BE_REPLACED