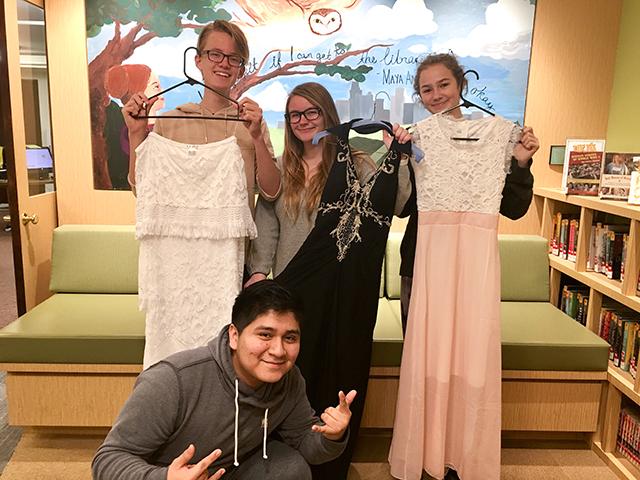 East Hampton High School students Wells Wolcott, Samantha Totten, Zoe Leach, and Kevin Chabla, in front, showed off a sampling of the prom attire that students will be able to choose from at the East Hampton Library’s prom drive on April 12.
By Johnette Howard

Attending the prom can be a milestone moment for high school students, but also a pricey one. With that in mind, the Suffolk County Library System is expanding its programs to help make the experience more affordable.Motivated by the success of a long-running prom drive at the Hampton Bays Library, the East Hampton Library and the John Jermain Memorial Library in Sag Harbor are accepting donations of clean and gently used prom dresses, formal gowns, tuxedos, men’s suits, dress shirts, shoes, ties, and handbags to distribute free of charge to would-be prom goers. The Riverhead Library is participating as well.The East Hampton Library is accepting prom clothing donations through April 12 at its front desk, and will then make all the items available to take home on April 14 from 1 to 4 p.m.Prom wannabes who may not want to wait that long can also visit John Jermain’s lower level now to see what items are available to take home, or to donate.“We just started taking donations, but people are welcome to come by through April 30,” said Kimberly Parry, the teen services librarian at John Jermain.The Riverhead Library, which has been accepting donations at its 330 Court Street location for several weeks, will make its items available at a Project Prom Boutique on May 4 from noon to 3 p.m. Students can visit that day to try on whatever catches their eye and take the items home for free.“It’s going to be very special,” said Tara Ragona, the library’s teen services coordinator. “We just had a donation from a local dress shop here, and our racks are filled. We want every girl and boy that wants to go to the prom to be able to go, and to feel special. The prom is such a big deal and it can be a stressful time in teenagers’ lives. So we want to help kids any way we can, and we think it helps the community too. It’s a great way to do some recycling, upcycling, spring cleaning.”Those who can’t make those dates will have yet another chance. On May 11, the participating Suffolk libraries will consolidate whatever donated prom gear remains for a free event from 11 a.m. to 3 p.m. at the Suffolk County Cooperative Library Systems  headquarters at 627 North Sunrise Service Road in Bellport. Vicky Ubelis, the head of teen services at the Hampton Bays Library, is credited with organizing the additional Suffolk branches to join this year’s prom drive. Ms. Ubelis said she broached the idea after noticing how many teens were coming to Hampton Bays from other towns seeking free gear to reduce their costs. “It’s almost a $1,000 just to attend the prom today, and how many teens can afford that?” Ms. Ubelis said. “I thought it would be a great program for other libraries to be involved with, and so far the response has been great.”The Hampton Bays branch will hold its pop-up store from May 13 to 24.Other organizations are also working to put prom within within reach of all students. The East Hampton Ladies Village Improvement Society will again offer prom clothing for sale at greatly reduced prices, and is currently accepting donations at its Bargain Box thrift shop at 95 Main Street in the village. The LGBT Network of Long Island, whose LGBT prom attracts students from all over the Island, is again running its Sponsor a Youth to Prom program. The event will be held on June 29 at Crest Hollow Country Club in Woodbury, and people interested in sponsoring teens for $80 per attendee can visit the organization’s website at lgbtnetwork.org.