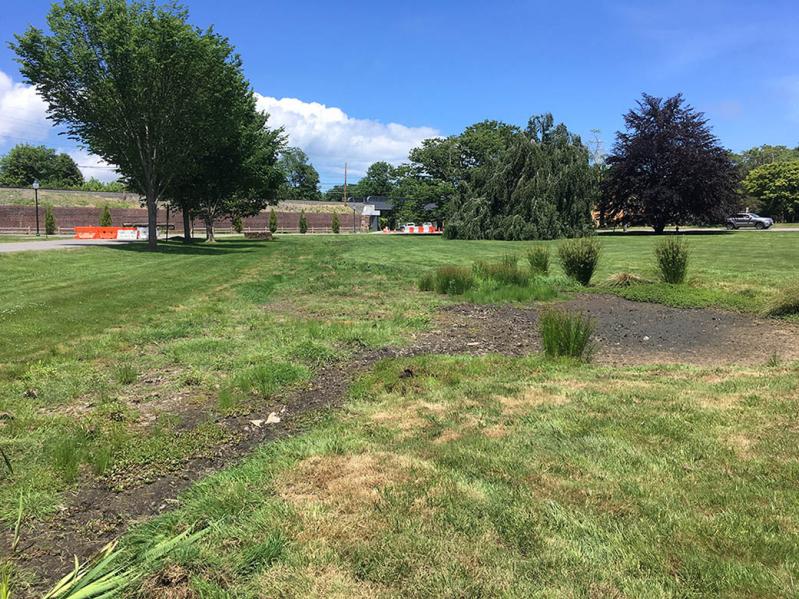 Water from North Main Street passes under the railroad tracks and across a green behind the East Hampton Methodist Church. New plantings there could slow the rate at which contaminants course toward Hook Pond.
David E. Rattray
By Christopher Walsh

The East Hampton Town Board is poised to direct a total of $1.14 million from the portion of the community preservation fund allocated to water quality improvements, for eight projects aimed at reducing nitrogen in local waterways. The board's water quality technical advisory committee recommended the eight on Tuesday.

The board's unanimous support followed a videoconferenced presentation by Chris Clapp of the committee and Mellissa Winslow, a senior environmental analyst with the Natural Resources Department.

Twelve proposals for grant funding were received in response to a January request for applications, Ms. Winslow told the board, and a subcommittee reviewed them. Some were subsequently refined, and eight were ultimately deemed complete.

Water-quality project applications must satisfy criteria including measurable benefit, durability, use of demonstrated technology, feasibility, and a commitment by the property owner. Once criteria are met, they are rated for factors including significance of impact, targeting of a water body, priority pollutants to mitigate, cost, maintenance, and monitoring.

In Montauk, the committee recommended grants for a property at 51 South Edgemere Street, which this year is the site of the Sweet Az sandwich shop, and to the hamlet's library. The sandwich shop building is adjacent to Fort Pond and within the pond's water protection district. As a commercial property, it is eligible to receive up to 65 percent of approved costs. The committee recommended an award of $200,000 for an innovative alternative septic system, to be installed under the parking lot, that would result in a "drastic reduction of nitrogen and pathogens" entering the pond, Ms. Winslow said.

The Montauk Library, which also falls within the Fort Pond watershed, would upgrade its sanitary system with a $126,262 grant the committee recommended, of a total cost of $174,041.

In East Hampton, the Whalebone Village affordable housing complex, located within the south end of the Three Mile Harbor water protection district, will receive $375,000 for a low-nitrogen septic system upgrade, which would fully fund the project. Ms. Winslow said the upgrade would remove almost 1,000 pounds of nitrogen per year.

In East Hampton Village, the Surfrider Foundation submitted an application for a bioswale installation along Methodist Lane. This would "capture suspended solids, nutrients, and pathogens before it moves on to Hook Pond," Ms. Winslow said. The village and the Ladies Village Improvement Society would maintain the installation, which Ms. Winslow said would also provide an opportunity for education and outreach, including garden tours. "We hope to get signage, and make the connection between where our water goes and how to better treat it," she said, although such materials would have to be funded by other means. The committee recommended a grant of $127,469 of a total cost of $201,588.

Gardiner's Marina in Springs, which is also in the Three Mile Harbor water protection district, seeks to upgrade its septic system to a low-nitrogen model. The committee recommended a grant of $58,760 for installation costs, of the project's total cost of $120,000.

Christ Episcopal Church in Sag Harbor will receive the full $143,830 cost for the design, engineering, and installation of an upgraded septic system, which will reduce nitrogen loads to Sag Harbor Bay. Sag Harbor Village was also recommended for a $72,400 grant toward a sewer treatment master plan. The village is seeking the same amount from the Town of Southampton. With the two grants, "they could expand the service area of the district to include 300 existing homes primarily within the shoreline areas along Sag Harbor Cove on the Southampton side and Sag Harbor Bay on the East Hampton side," Ms. Winslow said.

Finally, the Wainscott Chapel, which is within the Wainscott Pond water protection district, will receive a grant of $36,665 for a low-nitrogen septic system upgrade. That grant, plus a $5,000 pledge from the Friends of Georgica Pond Foundation, will cover the project's full cost.

"All of these are really outstanding projects that will lead to improved water quality and the reason we have the C.P.F. water quality fund," said Supervisor Peter Van Scoyoc. The board will schedule a public hearing before taking a formal vote to fund the projects.