And for some new teachers, back to school means back to their alma mater 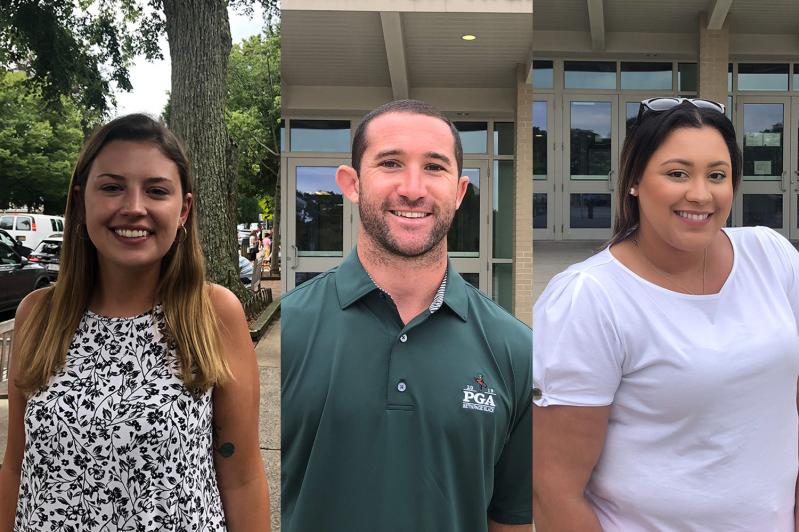 Michelle Taveras, Rob Rivera, and Alex Bates are East Hampton High School Bonackers in more than one way. They are East Hampton alumni, with Ms. Taveras and Mr. Rivera having graduated in 2011 and Ms. Bates in 2013 — and now, they have been hired as teachers in the school district.

“I’ve always wanted to be a teacher, and coming back to East Hampton feels very rewarding,” Ms. Taveras said. “It’s a little intimidating, but there’s a level of comfort. This feels like home to me.”

Ms. Taveras, who first taught in the North Babylon School District, will teach Spanish at the John M. Marshall Elementary School. Mr. Rivera, who is technically part time, will teach physical education at East Hampton High School and will also be involved in coaching. Ms. Bates, who spent three years as a substitute teacher in East Hampton, will teach English as a new language at both the high school and middle school.

“There’s something about being away for six years and then coming back to serve the same community and school that I grew up in,” Ms. Bates said. “I’m lucky, 100 percent.”

Mr. Rivera said there will be an interesting adjustment — going from calling his former East Hampton teachers “Mister” and “Miss” to considering them colleagues.

They join a cluster of more seasoned faculty who are also alumni — including Tim Fromm, a high school assistant principal, Georgia Flight, an English teacher, Jason Menu, a gym teacher, and Andy Rigby, a technology teacher.

Mr. Rivera, Ms. Taveras, and Ms. Bates all said that as recent graduates who had similar experiences growing up in East Hampton, Montauk, and Springs, respectively, they can relate to the students today.

“I know where they’re coming from, as opposed to someone a little farther removed,” Mr. Rivera said. “As a student you get a lot here in this district. The teachers, the resources, and the broader community — you kind of take that for granted. You come back and appreciate it.”

Ms. Bates said she has seen the atmosphere in East Hampton schools develop into a much more integrated, positive one than the cliquish feeling she got during her time in high school.

“In the last three years, I feel like it’s developing more into a community, especially with the population I work with,” she said. “I feel like now the district has really worked to bridge that divide.”

Another new face at East Hampton is Danielle Zarate, who will teach high school special education. She spent a month teaching second-grade English in China this summer.

“It was so cool to see what their educational system looks like. It’s pretty different,” said Ms. Zarate, who also has a background in art and math.

Christine Taylor is also new to East Hampton schools. She is a former health teacher in Westchester who took a few years off to work in the private sector. She has returned to teaching, this time as a family and consumer science teacher.

“I’m looking forward to taking things I learned outside the classroom and bringing them to my students,” she said. “It’s cool to come back to the classroom.”

Dr. Robert Tymann, East Hampton’s assistant superintendent for curriculum and instruction, said he believes “the new staff we have selected this year will develop the characteristics, behaviors, and beliefs necessary to help our schools move in the right direction.”

New teachers are just one facet of back-to-school time in East Hampton. New rules and new classes are often part of the equation, too.

Adam Fine, the East Hampton High School principal, said the school will be banning the use of earbuds and headphones in the hallways this year.

“It’s a safety concern. I’m super liberal and supportive of kids, but you know what, it’s not safe,” he said. “You can’t hear adults’ voices. We’re saying in the hallways, stop and take them out. That’s four minutes between classes. You can use them in the cafeteria, or in classes with teachers’ permission.”

At Sag Harbor’s Pierson Middle and High School, two new classes are on some students’ schedules. In the seventh grade, a course called “PLANT II” is being piloted as the second year of the school’s new Preparing Learners for a New Tomorrow program. In PLANT, students don’t learn specific content areas, rather, they learn how best to learn and study.

“It’s pretty innovative. Most schools are not having classes where they’re teaching students how to learn,” said Brittany Carriero, the middle school principal. “It’s going to up the ante from what they learned in the previous year: how to research, what research writing is, to understand bias and perspective — which we feel is particularly important in this day and age — and study skills, coping mechanisms because we understand there is a social-emotional need, and digital citizenship.”

In 10th grade, Michael Guinan, Pierson’s assistant principal, will return to teaching alongside Peter Solow, an art teacher, for a class called Mind and Meaning: Is There a Text in This Class? Mr. Guinan described it as a preparatory class for students interested in doing the International Baccalaureate program, with a focus on nonfiction reading and writing.

“The idea is ‘How do we unpack text to find and make meaning?’ ” Mr. Guinan said. “We want to work with them to strengthen their ability to interpret and analyze different types of texts.”

At the Springs School, where there are some construction projects underway, a new car line system for drop-off and pickup is now in place. Students who arrive early to school can now make use of the school courtyard, and recess will be on the softball field. The changes are detailed in “welcome back” packets that were sent home over the summer.

“What hasn’t changed is the familiar faces of all staff welcoming you and your children back to school,” Debra Winter, the superintendent, said in a letter to families.

In the Wainscott School District, the faculty will transform an ordinary hallway into a “sensory hallway,” complete with wall decorations and floor decals that promote an active lifestyle and offer students a way to burn some excess energy when they can’t sit still in class.

“It encourages the children to get moving,” said Deborah Haab, Wainscott’s superintendent. “We all need to get up and move more. . . . [It’s] something that is certainly going to benefit children.”

At the Amagansett School, a new program called Enrichment for All will be piloted this year, and a new colorful, whimsical, seaside-theme mural will greet students just inside the main entrance. Its theme? “Place of good water” — the definition of the name “Amagansett.” 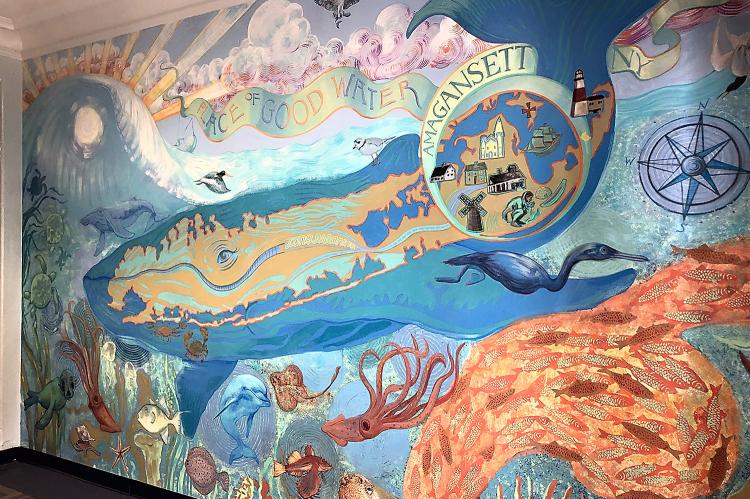