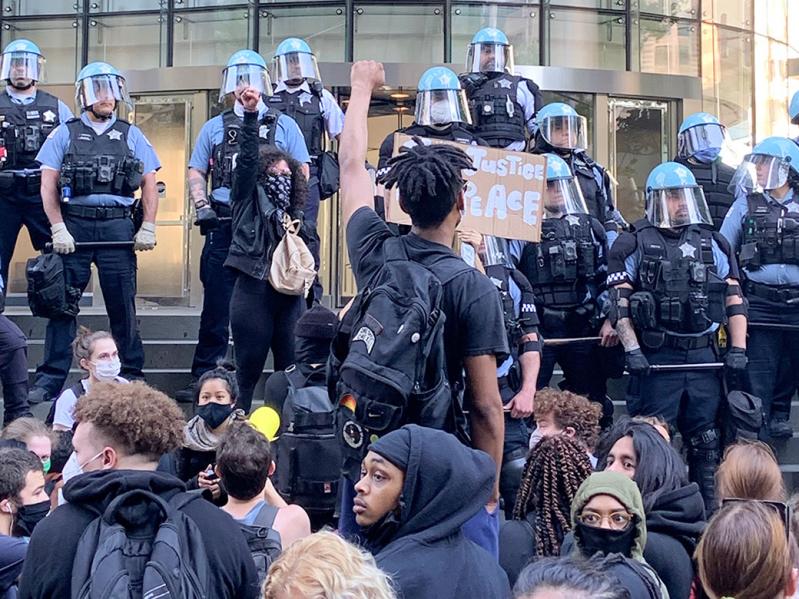 Outside Trump Tower in Chicago
Steans-Gail

Following the recent murders of Ahmaud Arbery, George Floyd, and Breonna Taylor, and the centuries of murders of black Americans at the hands of white Americans and law enforcement, cities across the country are experiencing an outpouring of anger, frustration, and mourning.

On May 30, we (three white 20-somethings) attended a large protest rally in downtown Chicago. Demonstrators marched and chanted around Federal Plaza, cars honked in solidarity, and taxpayers of all ages and races demanded reform of an institution we pay for and feel does not protect and serve all Americans equally. It was exactly the sort of peaceful First Amendment expression our country professes to stand for, and law enforcement professes to protect.

When the protesters arrived at Trump Tower, the tone shifted. We were met with scores of police officers in riot gear, batons out, looking, in our opinion, for a fight. Understanding our role as allies, we put our bodies at the front of the crowd, directly in front of the line of officers, arm in arm with our fellow protesters. This meant we were some of the first in the crowd to see and feel the police aggression.

Once the officers were given the order, they began shoving us back with no discernible or communicated motive. We witnessed police officers grab and throw otherwise peaceful demonstrators carelessly and violently to the ground. The wave of aggression subsided within a few minutes and the crowd again grew peaceful, so peaceful that many of us took a seat on the ground. Not long after, however, a wall of police officers on horseback ominously appeared behind the other officers, who again pushed forward with no clear objective, needlessly and aggressively assaulting demonstrators.

Our experience was certainly frightening, but obviously pales in comparison to those of protesters who have been tear-gassed, pepper-sprayed, and experienced other forms of violence. Thanks to our privilege, this was a side of the police force that we knew we were protesting and yet had never experienced personally. What we saw was alarming and most certainly did not communicate an intent to protect or serve anyone who was there to protest. It also confirmed a disturbing narrative: Police in riot gear had callously and unnecessarily initiated violence with a crowd of peaceful protesters.

Evidently, while we were gathered at Trump Tower, “looting” began somewhere in the downtown shopping district. We cannot contest reports of looting we did not see; all we can say is that we saw no such thing before 4:30 p.m. This made it all the more confusing when, minutes after leaving, we Googled “Chicago Protest Trump Tower” and saw the headline: “Protesters Smash Windows In The Loop.” That headline did not align with our lived experience and was especially shocking given that it was paired with a photo depicting cops throwing protesters to the ground. The dissonance in that reporting was stark but not unique.

National coverage echoes the dominant narrative of protests turned violent by dangerous looters and “outside agitators,” failing to meaningfully address the prevalence of police violence against black and brown protesters and the fact that these abuses persist at demonstrations meant to address this exact brutality. We do not contest the existence of unpeaceful actors, but the distraction they provide from the police violence both at these protests and in the everyday lives of black Americans is dangerous and disturbing.

We have spoken with friends who have attended protests across the country and who report the same story of police in riot gear inciting violence at otherwise peaceful protests, only to later see their experiences obscured by articles and headlines condemning destruction caused by looters and attributing violence to criminals and outsiders.

It is not our intention to take up space in a discussion of police brutality or the horrific murders of Ahmaud Arbery, George Floyd, Breonna Taylor, and now David McAtee. Rather, we hope to share our experience with fellow white Americans and ask that we be vigilant in our consumption of media depictions of these protests. White Americans live sheltered from police brutality and aggression, and the lack of media coverage of this ongoing brutality allows us to remain willfully blind to the role the police play in creating and escalating violence. Black Americans are begging us to listen and trust their lived experiences.

We encourage our fellow white Americans who have been unable to attend these protests themselves to talk with those who have and to seek out alternate reports of Black Lives Matter marches, which are moving and historical displays of shared humanity.

Sadly, these protests risk becoming yet another example of police brutality, a disregard for black life, and a failure of the white establishment to keep the spotlight squarely where it belongs: on the police.

The Steans-Gail siblings’ family home is in Chicago. They are frequent visitors to Amagansett.