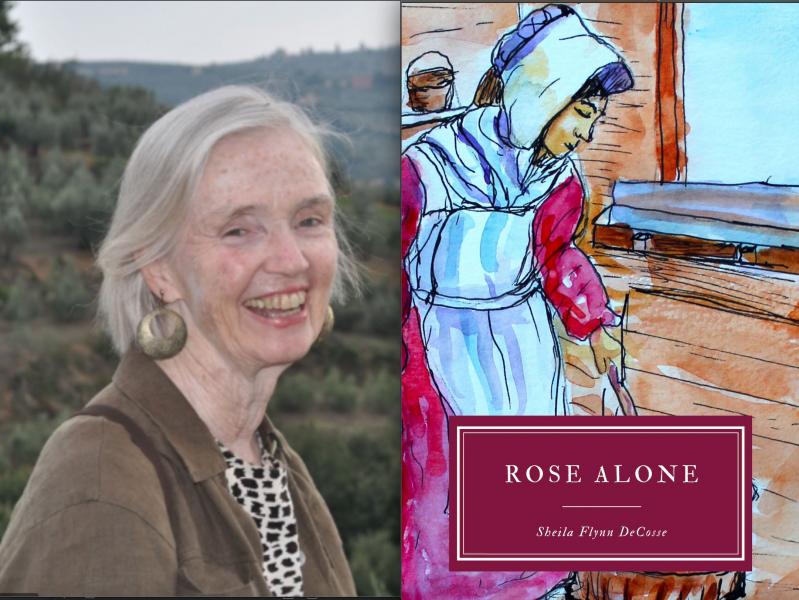 Set in the era of the French and Indian War (that's the confusingly named one where it was French colonial forces versus English colonial forces, with the French supported by Indigenous allies), "Rose Alone" by Sheila Flynn DeCosse, a historical novel for teens, touches on an episode in history that is little explored by literature for young readers: the mass deportation by English forces in 1755 of thousands of Acadians, French-speaking families who lived in farming communities in Nova Scotia. Acadians were seen as potential allies of the French, and their presence was not tolerated in the English-controlled territory. Families were forcibly uprooted and displaced to English colonies.

The novel traces the fate of Rose, "a dark-eyed, black-haired, Acadian girl of fourteen years of age." Rose's life in the heart of family and community in Acadia ends abruptly with a forced evacuation followed by a harrowing sea voyage that lands her in colonial East Hampton. She is separated from family members and the Acadian boy who is her first love. She is denied free use of her native language, French being the language of the enemy in the community in which she finds herself.

The French language in the novel is of both home and battle ground, the apt embodiment of Rose's connection to her heritage as well as her alienation from the culture of the English colonies. It is notable that "Rose Alone" is published by a program of the Center for the Advancement of Languages, Education, and Communities (CALEC), a nonprofit organization that, according to its website, is "focused on promoting multilingualism, empowering multilingual families, and fostering cross-cultural understanding." Ms. DeCosse activates Rose's story in an exploration of these values, and is able to engagingly develop her protagonist against a backdrop of historical events and injustices that are certainly more than relevant today.

As the novel progresses, Rose emerges as a resourceful fighter, adaptable and capable in her new situation in the home of an East Hampton family, where she shares quarters with a young enslaved woman called Pegg. While Rose's situation is never specifically defined as servitude, indentured servitude, or enslavement, it is clear that she is trapped in a socio-historical stronghold. She has little choice, scarce opportunity, and is by no means free to leave. While Ms. DeCosse takes care to highlight Rose's compassion for Pegg, and Pegg's compassion for Rose, the sense of identification does not read as forced: Enslavement in colonial East Hampton is a matter of historical fact, not a contrived matter of thematic development.

Historical details — sheep and butter churns, specific foods and chores, the bluff road to Amagansett, "Whale ho!" (a whale spotted off the coast) — are well researched and deftly inserted to anchor the sense of time and place. Line drawings by Teresa Lawler that are naive in style and sweet in character are interspersed throughout the text to illustrate various scenes. Where illustrations are generally absent in novels for teens, these offer a special opportunity to expand the narrative through their simple, clear perspective.

A strong sense of cultural identity as an Acadian pervades Rose's forthright and emotional voice as the story progresses in the first person and in the present tense. The drama of her traumatic, displacing experience dwells in immediacy and gains momentum. The man of the house harbors abusive bitterness; the woman of the house nearly dies in childbirth; Rose's bond to her first Acadian love is tested by the advances of a young local man well versed in butter churn repair.

Feelings are perpetually intense. Melodrama happens. Yet the emotion in Rose's narration rings true, and the teen audience for which the novel is intended will recognize the thrill of keeping pace with the passion of one's own story as it unfolds.

Evan Harris is the head of children's services at the Amagansett Library. She lives in East Hampton.