Sag Village veterans fought in every war since Revolution 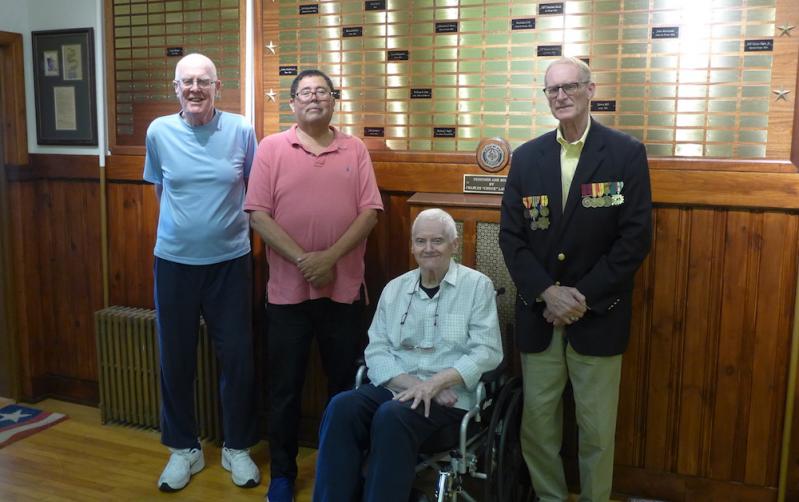 To mark this year’s 100th anniversary of the American Legion, members of Sag Harbor’s Chelberg and Battle Post 388 have created a remembrance journal to honor the service of village veterans. The book will be presented to members at a dinner celebrating the centennial on Tuesday, and then made available to the public.

“We started working on the journal over a year ago,” said David Pharaoh, the post’s commander. “We pulled the information we had, and also went out to the public.”

The journal begins by noting that “Sag Harbor has sent sons and daughters to every war since the American Revolution,” and then provides a history of the soldiers’ bravery and sacrifices.

“We lost 46 guys in the Civil War, that was like a whole graduating class, and there were 446 people from Sag Harbor in World War II, that’s like 10 percent of the population,” said Mr. Pharaoh.

The book provides a short history of the nation’s wars, and the founding of the post, but the bulk of it is a memorial, complete with photos, to the fallen.

Pvt. James Frederick Chelberg and Pvt. George F. Battle, for whom the post is named, were the first and second Sag Harbor residents killed in action in World War I.

“By the time the Sag Harbor people got trained and overseas and into the fight, there was really about two months left, so unfortunately these people were K.I.A. [killed in action] only about six weeks before the war ended,” said Robert Doty, a decorated veteran of the Vietnam War who is the finance officer for the post, and who helped research the journal along with Deborah Guerin, the past president of the American Legion Auxiliary, and David Nimz. Mr. Nimz wrote the text.

One of the Air Force members who died during World War II was 2nd Lt. Arthur Browngardt Jr. His younger brother Robert, a 21-year Navy veteran who served in Vietnam, is a post member. “My brother called his plane the Sag Harbor Express,” said Mr. Browngardt. A picture of the late Mr. Browngardt included in the journal shows him standing in front of that plane.

The post recently finished building an exhibition hall for its artifacts at its headquarters on Bay Street. The space will officially open on Nov. 11, Veterans Day, said Mr. Pharaoh. The building is also the site of the Dockside Bar and Grill, which rents out the space from the post. “Because of the restaurant we don’t have to go out and raise money,” said Mr. Pharaoh.

There are currently 135 post members, he said, and between 40 and 50 of them regularly attend the organization’s monthly meetings. “That’s pretty good,” he said. “We try to keep the meetings short, we feed them dinner, because we have a lot of widowers, and we go over matters pertinent to the legion.”

A service officer helps members get to the meetings, and the post has also provided assistance with everything from paying bills to figuring out how to procure a wheelchair. It also donates money to the greater Sag Harbor community.

“Since 2016, we’ve put out almost $100,000 in scholarships to Pierson High School graduates and to relatives of members,” said Mr. Doty. The post has also donated money to the village’s food pantry, the Boy and Girl scouts, the Fire Department, and the ambulance service.

“We are very fortunate our legion does quite well,” said Mr. Pharaoh. “A lot of posts around country are closing because of lack of membership and money, but we’ve got it going on.”