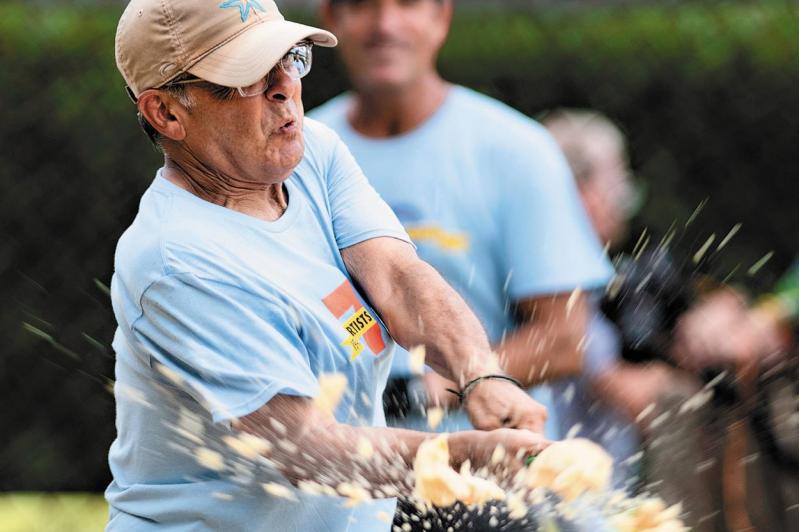 Leif Hope, who has been an integral part for a half-century of the Artists and Writers Softball Game, conceived 71 years ago, they say, as a madcap frolic on Wilfrid Zogbaum’s front yard in Springs, made an astounding confession in Rowdy Hall the other day.

“Yes, Jack,” he said at the end of a clam chowder lunch, “we [the Artists] do want to win The Game.”

This from one who had always portrayed the Artists as insouciant devil-may-cares in contradistinction to their frothing foes, the Writers, asocial scriveners to whom, once loosed from their garrets, winning meant everything.

Well, it’s true — and has been for some time — the day is long passed when the Artist teams in this annual agon were the patsies. Mike Lupica, exuberant as always, remarked after last year’s 12-8 win by the Writers that it was his team’s third in a row, failing to mention that the Artists had won the previous three.

It’s all pretty much even now, though, happily, bench-clearing set-tos, often involving umpires who would benefit from thicker lenses such as you’d find at Mount Palomar, and endearingly klutzy play still exist.

In the end, Hope would say, it’s all about entertainment and raising money for The Game’s four local charities — the Eleanor Whitmore Early Childhood Center (formerly the East Hampton Child Care Center, formerly Head Start) being the longest running, dating to 1973 — as Hope, as graceful and engaging a 91-year-old as you’d ever want to meet, would agree.

It was he — though he always says it was the scribes who started it by welcoming to their roster one year two lawyers, “writers of legal briefs” — who began to broaden the palette, as it were, until pretty much anyone could qualify as an Artist if you gave Leif a sketch, and could hit.

Or pitch. A smile still comes to his face as he recalls Paula and C.B., pro softball battery mates from Hartford whom Tom Twomey flew over for the 1977 game, and whom Hope told to wear something feminine so the Writers wouldn’t catch on, until, of course, they began being mowed down by speed-of-light fastballs in the first inning.

“Two or three of the Writers wouldn’t talk to me for maybe five years after that,” The Game’s impresario said.

Under Benito Vila, the board’s new president, the rosters have exploded, with the Artists, managed by Ronnette Riley (the world’s foremost scorekeeper) and Hope, sending 24 into battle at East Hampton’s Herrick Park this Saturday, and with the Ken Auletta and Lupica-led Writers, not to be outdone, suiting up 31.

The Writers’ roster includes — wonder of wonders — writers, novelists, a superb biographer in Walter Isaacson, media people, a parenting expert, a stand-up comedian, an ice hockey legend (Ron Duguay), the president of the Explorers Club (and a long-ball-hitting lefty), Richard Wiese, and a rap artist.

Andy Friedman, an essayist, musician, and illustrator (all the bases covered there) was last year’s most valuable player, chiefly in honor of his three-run blast into the tennis courts beyond the fence in left field and for, defensively, being in on an 8-to-5 game-ending double play.

Over the course of the past decade, though, Hope’s nod for “best player” goes to David Baer, the Writers’ shortstop, a former Star intern (to whom this writer will be forever grateful for freeing him from the polo beat) and former television producer who’s happily teaching high school English now.

The Artists’ legions are — curiously, given Hope’s broad-brush approach in the past — not quite as inclusive as the Writers’, most of its players being artists of one sort or another, though there is a skin care entrepreneur and an “influencer,” both firsts, in this writer’s experience.

As for out-and-out celebrities, one never knows who might show. Bill Clinton, when he was governor of Arkansas — and later in his career as well — did, as have Alec Baldwin, whose foul balls into the crowd lining the third-base line have become the stuff of legend, John Irving, Paul Simon, Carl Bernstein, Chevy Chase, Kristin Davis, Gael Greene (in high heels), Joe Torre, John Franco, and Josh Charles (2010’s M.V.P.), to name a few.

According to Vila, “Raffles and field-side seating will be available starting at 1:15. Player batting practice starts at 1:30. Both squads will line up for press photos at 2:45 to start the pregame festivities. That pregame sequence will be led by WINS’s Juliet Papa, The Game’s master of ceremonies, and is scheduled to include longtime East Hampton Village Mayor Paul Rickenbach, who will be introduced by Debra Stein, the Jewish Center of the Hamptons’ cantor. The Choral Society of the Hamptons is singing the national anthem, and the ‘Hot Bench’ judge, Pat DiMango, is to deliver the ceremonial first pitch.”

“In-game activities will feature G.E. Smith singing ‘Take Me Out to the Ball Game’ in the middle of the third inning and a kids base run in the middle of the fifth. Caroline Doctorow, who’s just back from a Woody Guthrie fest in Oklahoma, will sing ‘This Land Is Your Land’ midway through the seventh inning.”

The Game’s beneficiaries are the Eleanor Whitmore Early Childhood Center, as mentioned above, as well as Phoenix House, the Retreat, and East End Hospice.

“We’re a rare summer fund-raiser out here that anyone can attend and which raises money for local nonprofits,” Hope said. “The money this game raises stays in the community and benefits those who live here regardless of whether they’re here for a few weekends or whether they’ve been here 300 years.”

Admission, as it seems always to have been, is $10.