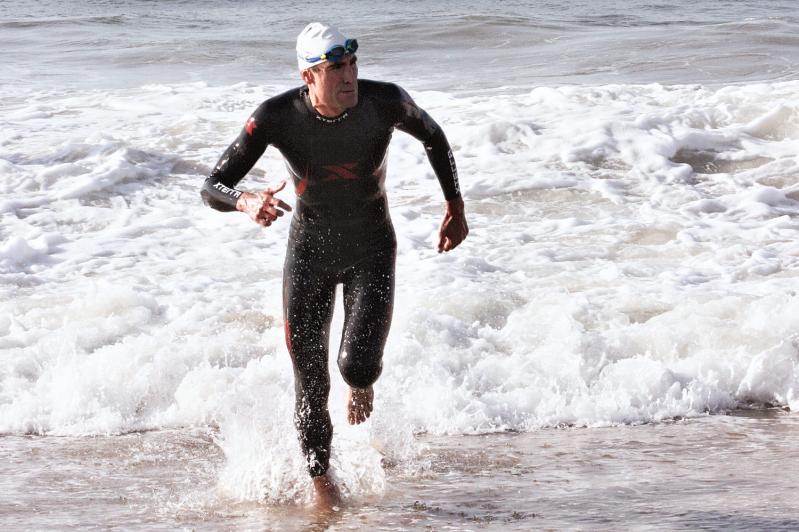 There was a double dip athletic-wise in Montauk this past weekend — the 5K, one-mile, and half-mile ocean challenge swims for the Montauk Playhouse Foundation Saturday and the Lighthouse sprint triathlon the next day.

On winning the Playhouse’s 5K, in an hour, 16 minutes, and 27 seconds, Petrzela, a 44-year-old part-time Springs resident who has won this race in the past, said the current was with the swimmers on the way back to the start-finish line at Ditch Plain, and that “the last mile is so serene, there are no houses, just the cliffs, pure nature — water and sea . . . man and sea. It’s the best swim race in the Hamptons.”

Wetsuits were definitely needed, said Petrzela, who wore one. One who didn’t, Mary Beth Moore, whose hands and feet became cold enough to warrant her return to the shore via an Ocean Rescue Squad jet ski, said she would next year.

Petrzela has done the Playhouse swims every year since they began in 2009. (The inaugural event drew 58 participants; the latest one, 132.)

Lori King of Amagansett, a long-distance swimmer who, except for a year when she was sidelined with a rotator cuff problem, has done all of them too, had just returned from a 36K (22.5-mile) race in Italy that started on the Island of Capri and ended in Naples. Nevertheless, she finished a close second among the 5K women to Jen Schumacher of Tarrytown, N.Y., the third-place finisher over all, who caught King at the second-to-last buoy. Schumacher’s time was 1:21:46, King’s 1:22:03.

King, who finished fourth over all, said that “about half the field dropped out in the Italy swim. There were crosscurrents and swells and most everyone got seasick. I’m still recovering, though I felt I had to do this swim . . . I came out to support everybody.”

She was wearing a black armband in memory of the late Charles van der Horst, a University of North Carolina medical professor who summered here and swam with Tim Treadwell’s masters group and ran in the track workouts that John Conner oversaw at the high school. Van der Horst died, at the age of 67, of an apparent heart attack on June 14, after finishing the sixth (15.7-mile) leg of the Eight Bridges marathon swim in the Hudson River. King said she thought van der Horst’s widow, Laura Svetkey of Chapel Hill, would be at Ellen’s Run in Southampton next month.

The Y.M.C.A. East Hampton RECenter’s youth swim team, the Hurricanes, were out in numbers that day, with their coaches, Tom Cohill and Cruz.

Later, Cruz reported that while the age-group divisions were broader this year, “our youngest team members proved they could keep pace with swimmers much older.”