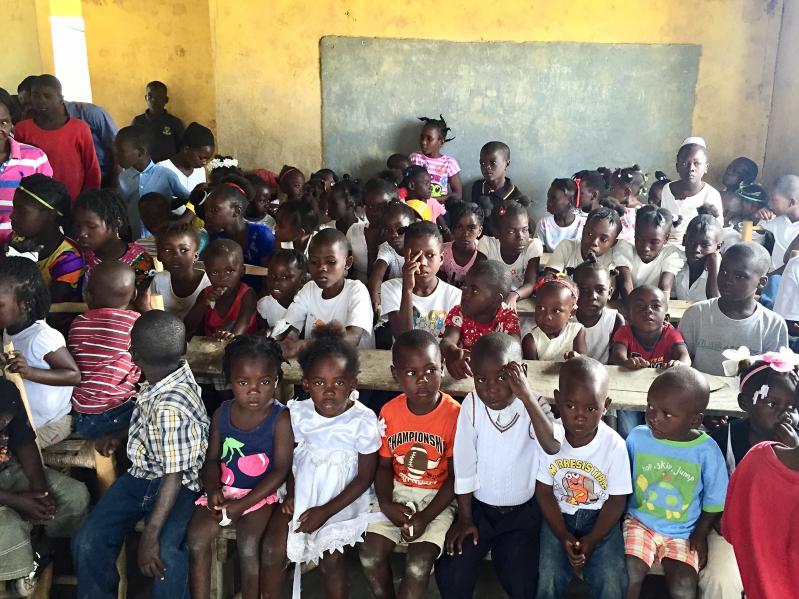 Ranquitte’s children eagerly await the construction of a Wings Over Haiti school in their village. Until then, there is no school for them to attend.
Judy D’Mello
By Judy D’Mello

Jonathan Glynn, a Sag Harbor resident and founder of the Wings Over Haiti nonprofit, smiled over a cup of coffee and admitted, “This project is about perseverance. It’s about commitment.”

It’s been nine years since Haiti’s 7.0-magnitude earthquake killed almost 250,000 people, and the beginning of Mr. Glynn’s efforts in that country. On June 22, the group will host its third annual benefit, fittingly held in three private hangars at East Hampton Airport.

The goal is to raise $100,000 and finally open the doors to a school — the organization’s second in Haiti — in the remote region of Ranquitte, a hillside farming community in the northeast part of the country. Ranquitte has no school for its 400 resident children.

The five poorest countries in the world, measured by gross domestic product per capita, are the Democratic Republic of Congo, Mozambique, Uganda, Tajikistan, and Haiti.

Naturally, one might imagine that these countries are among the top recipients of aid from the United States. Wrong. The main beneficiaries are, in fact, Iraq, Afghanistan, Israel, Egypt, and Jordan. Not one of the five poorest countries is among the top 10 recipients of American aid. (The others are Pakistan, Ethiopia, Kenya, Syria, and South Sudan.)

Foreign aid has little to do with charity or ameliorating inequality, and everything to do with entrenching it. Mostly, aid is wielded as a weapon to boost trade and geopolitical clout.

In the aftermath of the 2010 earthquake, Mr. Glynn saw firsthand how aid for a disaster can often become a disaster when he flew his Cessna single-engine plane filled with much-needed medical supplies and food into the capital of Port-au-Prince. During several of these humanitarian runs and after speaking with countless relief workers stationed there, he became a clear-eyed observer of Haiti’s dysfunction and soon recognized that long-term reconstruction efforts, such as providing better education, are the key for a more hopeful future.

So, with the help of a Long Island middle school teacher and a Haitian-American high school guidance counselor, he opened the first Wings Over Haiti school, which today boasts more than 180 students from nursery to seventh grade and a faculty of 25.

Nine years later, he refuses to quit. He couldn’t, anyway, not after Magalie Theodore, a Ranquitte-born Morgan Stanley employee now living in New York, contacted him about building a school on her family’s seven-acre plot in Ranquitte. Mr. Glynn agreed immediately and formed a Wings Over Haiti executive committee that includes Arthur Bijur, an Amagansett resident who is the co-director, Al Tuff and Michael Serra, who bring construction expertise to the table, Ted Morency, a Haitian-American and recent Ross School graduate who is responsible for fund-raising, and Richard Ficara, a Sag Harbor documentarian and videographer.

In 2017, the team joined with Folioeast, a roving curatorial art project founded by East Hampton’s Coco Myers, and hosted their first benefit at the Watermill Center, featuring a silent art auction of works by the many local artists Ms. Myers represents.

They did it again last year and raised enough money to break ground on the school in Ranquitte in March. Villagers there have watched eagerly as the first building has taken shape. Although it is still unfinished, a few early-education classes are being held in the evenings.

“Whatever we raise this year,” said Mr. Glynn, “will go towards finishing construction, hiring teachers, bilingual administrators, buying furniture, school supplies, and food.” The school will provide children with two meals a day — a major consideration in a country where the average daily income is less than a dollar.

The June 22 bash promises to be bigger and better, with D.J. Giancarlo, dancing, raffle prizes, food and drinks, and an art auction. An honorary committee of Hamptons luminaries has also been formed, made up of Patricia Arquette, Maria Bello, Molly Channing, Eric Fischl, Donna Karan, and Emily Wickersham, to add some celebrity-powered commitment to the cause.

Mr. Glynn’s plane, the same one he flew in and out of Haiti in 2010, will also be there for kids who would like to climb aboard and sit in the pilot’s seat.

“I want this to be an event for families,” said Mr. Glynn. “It takes a village,” he continued, smiling, “to help a village. I hope as soon as we get the school up and running, we can organize exchange programs between those students and our local schools here.”

An added bonus at this year’s event was generated by Ted Morency, the 20-year-old committee member who will be a sophomore at Cornell University this fall: a live auction for a chance to win a trip to Haiti, including a visit to Ranquitte for the grand opening of the school.

It’s not easy to think positively about the future for Haiti and its citizens. It’s far easier simply not to think about it. But for this dogged group of East Enders, now is not the time to walk away. Besides, there’s another Haitian saying that they like to remind themselves of — “Men anpil chay pa lou.”

It means “Many hands make the load lighter.”

This year’s Hamptons for Haiti art benefit will be held on June 22 from 5:30 to 8:30 p.m. at East Hampton Airport on Daniel’s Hole Road. Tickets are $125 (free for children 12 and under) and can be purchased at wingsoverhaiti.net.