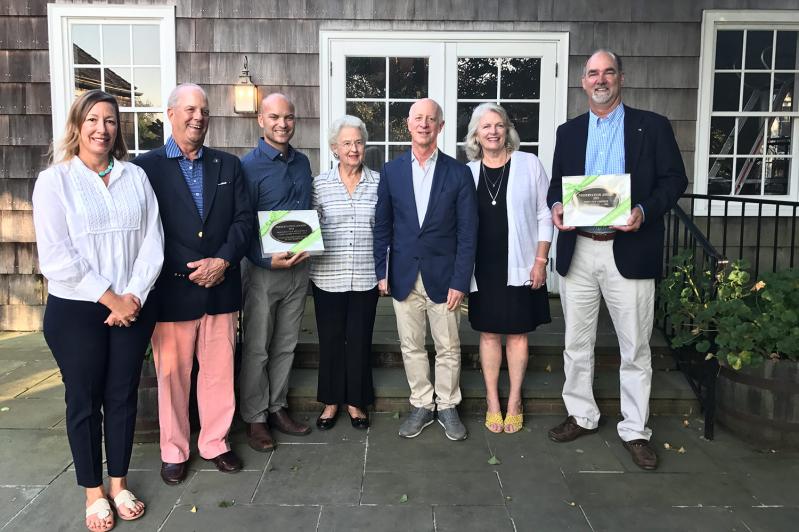 To honor the work being done to restore buildings of historical significance here, the Village Preservation Society of East Hampton presented awards to village and town officials for the Gardiner Mill Cottage in the village and the Amagansett Life-Saving and Coast Guard Station at the group’s annual meeting on Saturday.

James and Gretchen Johnson, and Dominic Ramos-Ruiz and Eric Ellenbogen received awards for the restoration of their private homes. The Johnsons own Nid de Papillon, a nearly century-old house on Old Beach Lane that once housed a Prohibition-era speakeasy, and Mr. Ramos-Ruiz and Mr. Ellenbogen have restored the Hiram Sanford House on Egypt Lane, which was built in the 1700s.

The Amagansett Life-Saving Station, once a base of operations for ocean rescues, dates to 1902 and is listed on the National Register of Historic Places. A yearslong renovation restored the building to its original appearance, and it opened as a museum in 2017. David Lys, an East Hampton Town councilman and the president of the Amagansett Life-Saving and Coast Guard Station Society, accepted the award.

Gardiner Mill Cottage, part of the last remaining intact home lot from 1638 in East Hampton Village, was recently restored by the village. It was opened to the public over the summer and serves as an art museum featuring the work of Percy Moran. A nephew of the painter Thomas Moran, he lived in the cottage from 1902 to 1916.

Paul Goldberger, a Pulitzer Prize- winning architecture critic, gave a talk at the meeting about the importance of preservation.